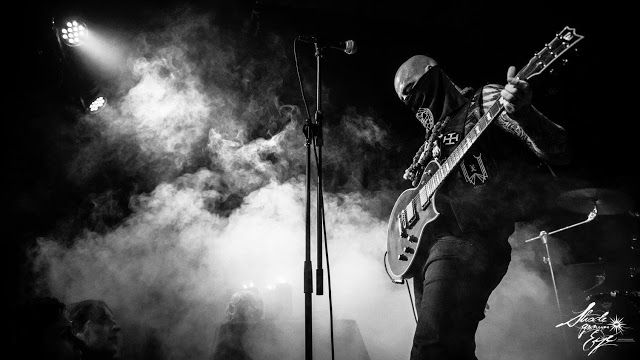 Greek occult black metallers with ritual & 70’s rock influences, ACHERONTAS, have signed a new record deal with Agonia Records. The band returned to the label after their 2011 departure, having previously released the EP “Hermeticism” and studio album “Vamachara” (both in 2011). The latter is going to be re-released on vinyl on August 31st, along with a rare demo and new cover made by Viktoria Polikarpova  (of Visionis Phosphorescent).
ACHERONTAS is currently working on its next studio album, that is supposed by be finished in February of 2018.
ACHERONTAS is no mundane project and as little is known about the band’s biography as the phrase “shrouded in mystery” would suggest. The band was launched in 2007 by Acherontas V.Priest (guitars & vocals) and stands at the forefront of the new wave of Greek black / occult metal scene, with strong dedication to spirituality, mysticism and magic, in both sound and image. A direct continuation to the pre-ACHERONTAS era. To date, the group released six full-length albums, with “Amarta अमर्त” from this year being the last of them.
The band commented: “During the creation of the second part of Reptilian Unification the synaxis of Acherontas also compiled the bases and foundations for the third one. Now we work on the final touches to accomplish the utmost forms and complete the trilogy gloriously. In December we enter the studio again to record the final part, which will be revealed on the solstice of 2018. A circle of creation closes and a new epoch begins. Spirit Above Matter!”.
On the meaning of ACHERONTAS, the band added (original spelling): “Acherontas is a Magickal Coven Dedicated to the Ancient Summerian Mysteries of Drakonian Blood. Many Traditions embraced these Ancient sources as footprints and take form in our Void as Astral Vampirism, Hermeticism, Kabbalah, Dream Workings and Luciferian Magick. True Sorcery is not an Art, it’s science…We are Real to Those with Eyes to see… “.