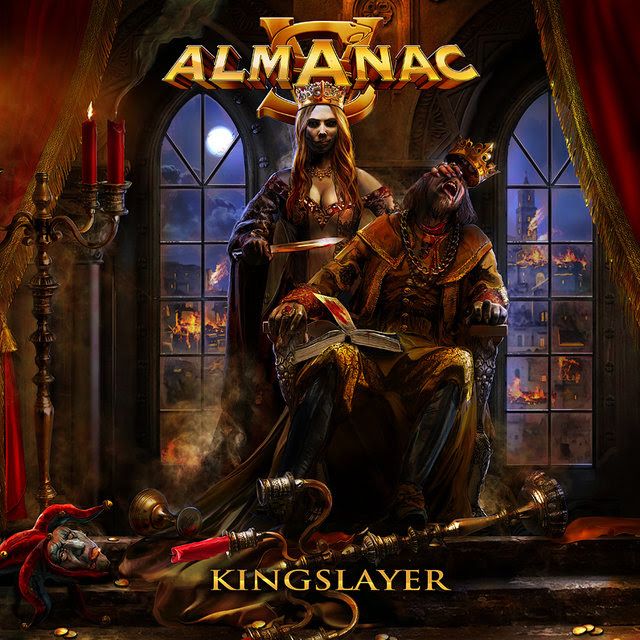 ALMANAC – the new band of Victor Smolski (ex-RAGE) – stands for a new dimension of symphonic power metal, featuring three singers Jeannette Marchewka (LINGUA MORTIS ORCHESTRA), Andy B. Franck (BRAINSTORM) and David Readman (PINK CREAM 69).
In March 2016, ALMANAC unleashed their highly acclaimed debut album “Tsar”, which entered the official charts in both, Germany (#74) and Switzerland (#87), followed by a European tour along with ORDEN OGAN, as well as their own headliner tour in spring 2017.
Within the past few weeks, ALMANAC has completed the recordings of their second longplayer entitled »Kingslayer«, recorded at HeyDay Studios in Wuppertal, Germany. “Our second strike is done,” reveals guitar player Victor Smolski and explains, that “”Kingslayer” is the logical follow-up to “Tsar”, just more compact, heavier and faster. Our previous live experiences could be perfectly permitted during the recordings. The band got closer and well attuned, you can feel this unified energy within the new tracks. We took a lot of time and gave our very best. “Kingslayer” is a crafted metal album with a lively power sound!”.
“Kingslayer” will be released on November 3rd via Nuclear Blast. The cover artwork was once again created by Hungarian artist Gyula Havancsák (ACCEPT, DESTRUCTION a.o.).
ALMANAC recently played at the ‘Masters of Rock’ festival, where they presented the first two new tracks live, ‘Losing My Mind’ and ‘Children Of The Sacred Path’. The concert will be part of the bonus live DVD, which will come along the limited first edition of “Kingslayer”.
Support World Of Metal
Become a Patron!
World Of Metal Magazine – Agora Grátis/Now Free!
Buy CDs in our store