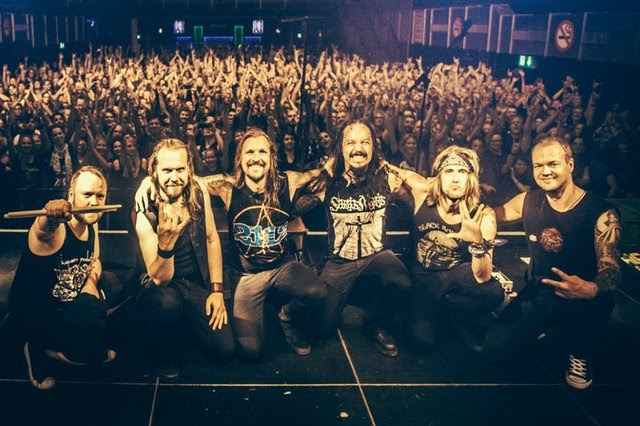 Melancholic progressive metallers AMORPHIS recently finished their successful 18-concert “Under The Red Cloud” summer tour where they played arena shows with Danish rockers VOLBEAT amongst others. But before the Finns close the touring cycle in support of their latest album, there’s great news from the band’s camp: AMORPHIS have signed another record deal with Nuclear Blast.

Guitarist Esa Holopainen commented:
“I’m really happy to announce that AMORPHIS got re-signed to Nuclear Blast! It’s nice to be working with such professional and familiar people. AMORPHIS has done a lot of touring for the past two years around the globe and now it’s time to head back to the studio. This means that the new album will be released next year! It has also been a really nice experience for all of us to play with Olli-Pekka again and for that reason we’re glad to have him participating in the making of the new record.”

Nuclear Blast CEO Markus Staiger added:
“I’m really proud that we can continue working with AMORPHIS, one of the early NB bands, which went through the roof with »Tales From The Thousand Lakes« back in 1994. Additionally they became really good friends of ours, which makes this working relationship even cooler. I’m already looking forward to their next album because it’s simply impossible for AMORPHIS to deliver a bad record.”

To make the last “Under The Red Cloud” show even more special, the band has come up with a great idea: fans can “jump on stage” with AMORPHIS at The Circus, Helsinki on September 23rd – as part of a 360° experience! The gig will be streamed live, free of charge, but fans can still donate directly to the band on the streaming page. You can also win a limited edition of an AMORPHIS VR headset and enjoy the show to the max: http://amorphis360.com/contest/

You can also watch the show, here: http://amorphis360.com/