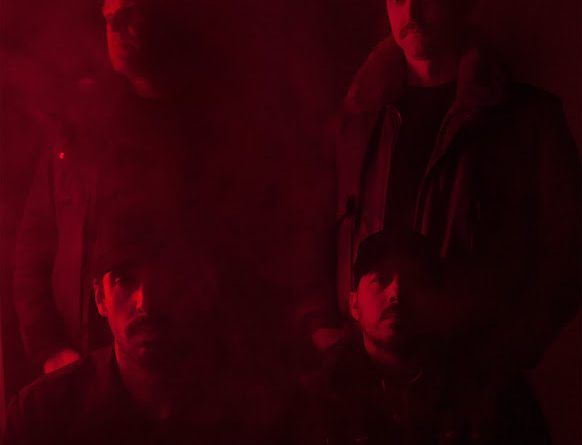 Having signed with independent New York based label, Tee Pee Records, Toronto quartet, BIBLICAL, are limbering up to release their second long player this September. Titled The City That Always Sleeps, the record will be released via Tee Pee on September 15, 2017.
Of the track, bassist and vocalist, Nick Sewell comments: “The lyrics to Mature Themes tell the story of a woman who realizes she needs to kill her father to be free of her ghosts.  We’ve always preferred story videos that relate thematically, rather than literal interpretations of the song lyrics.
“So the video for Mature Themes has nothing to do with lyrics. But, it does relate the theme of the record. This time, it’s about being haunted by the fear of failure, and how far one might go to avoid it.”
BIBLICAL‘s sophomore album is a deep dive into sludgy psych rock that explores spaces, textures and tones beyond the outer limits. Heavy, propulsive and totally hypnotic, The City That Always Sleeps is BIBLICAL at its weapons-grade best, leveraging rhythm and dynamics to explosive effect. Smashing supersaturated guitar riffs, piled-high psych production and the ghostly croon of bassist/vocalist Nick Sewell unite to create monstrous music that fires off svelte, snaking grooves and turbulent, gorgeous chaos.
Commenting on the album, Sewell adds: “Our album is a meditation on buried things—buried ideas, buried feelings, buried people. We’re all dragging around ghosts, whether it’s someone we’ve lost or things we think we should have done differently.”
In addition to Sewell, the quartet features in its ranks guitar / synth player Andrew Scott (both Scott and Sewell played with Death From Above drummer Sebastien Grainger in his Sebastien Grainger & The Mountains project), lead guitarist Matt Mclaren and drummer Jay Anderson (also of Comet Control). Motivation for the band’s name is rooted in the “Ghostbusters” quote from Peter Venkman: “This city is headed for a disaster of biblical proportions!”
The City That Always Sleeps is the follow-up to BIBLICAL’s celebrated debut, Monsoon Season (2014), hailed by The Huffington Post as “furious”. Inspired by greats such as CAN, MC5 and Blue Öyster Cult, the sound of BIBLICAL has been lauded as “a Red Sea-parting surge of narcotic guitar noise” by Pitchfork and “deliciously smothering” by Canadian national magazine Exclaim!. Before and since the 2014 release of its full-length debut, BIBLICAL has toured and / or rocked stages alongside DFA1979, Eagles of Death Metal, Fucked Up, Kyuss Lives! and Red Fang among many more.