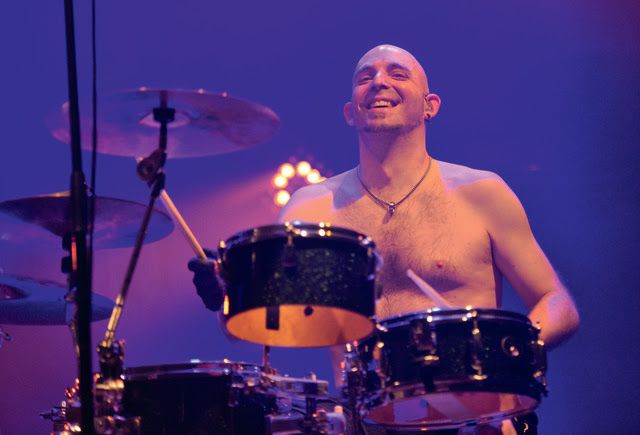 Krefeld, Germany-based progressive power metallers BLIND GUARDIAN announced the release of their first live record in 14 years just a few weeks ago. The 22-song package entitled “Live Beyond The Spheres”, will be purchasable as a 3CD-DIGI as well as a 4LP-BOX. It’s scheduled to be released on July 7th, 2017. Besides all-time classics such as ‘The Bard’s Song (In The Forest)’, ‘Valhalla’ and ‘Mirror Mirror’, rather rarely performed songs like ‘And Then There Was Silence’ are also a part of this live record.
“We compiled one ‘show’ out of the best tracks from more than 40 live performances, recorded during our European tour in 2015. That’s how we pinned down the most beautiful and atmospheric moments on this medium,” explains guitarist André Olbrich.
Today, BLIND GUARDIAN unveil the live track clip to the song ‘Prophecies’. This video is a really special one as it was put together by drummer Frederik Ehmke himself using only the material shot with one single camera, which witnessed each show of the tour! You should definitely not miss this highlight. Read Frederiks statement below to find out more about the production of this clip:
“Being a fan of the potential of the camera for my private use I decided to take my Hero4 Silver with me on our worldwide tour and recorded all of the shows. First I started with only angles around my drumkit cause they are pretty hard to get with common cameras and therefore special – then I had the idea of creating a videoclip to one song using the footage from all the different shows shot with this only one single camera and tried to find more different varying positions for my GoPro to record the show each night. The camera stayed basically in the same spot for the whole show and I moved it to try another position for the next show. Hereby I collected a huge amount of shows which I could pick from to put this video together. All toured territories and continents are finally represented. But there is no light without shade. Since I usually mounted my GoPro on a regular microphone stand, I asked every day for the stand and if I could put the camera in my desired spot without being in the way for anyone. I guess that annoyed some people of the crew – especially when on a busy day they forgot to have the stand ready for me and had to crawl into dark cases to get it. But I m happy to have insisted, because the video now shows some very rare and special angles – views direct and close to the band that you never saw before. It benefits from the GoPro´s ability to capture wide and narrow fields in a high resolution and especially high frame rate, which are absolutely necessary in the stage environment, that quickly changes from gloomy to sun bright and on top comes with fast movements. The camera itself is small and therefore not blocking the view for the audience, but at the same time can be placed very close to the performing musician.”
He also explains the choice of the song: “‘Prophecies’ was the perfect choice for the song. It is an enjoyable one for us to perform and I guess that gets pretty obvious when you watch our stage acting. From the beginning it was very well received by the fans too, which always gives us a lot of the energy back that we put into our shows. And of course it represents the latest studio output of the band and is an important step in the saga of the Red Mirror. Watching the video brings back nice memories of the many venues and crowds we played for on this long tour.”
Support World Of Metal
Become a Patron!
World Of Metal Magazine – Agora Grátis/Now Free!
Buy CDs in our store