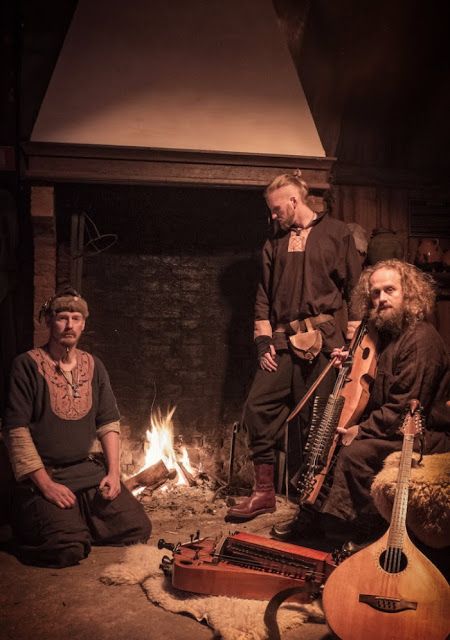 After nine years of performing and collecting song material, KAUNAN will finally release their debut album entitled “FORN” through By Norse Music later this fall.
Einar Selvik – By Norse Music Co-Founder comments:
“By Norse started out as an outlet for Norwegian art and culture and with this signing one might say that the label is branching out into being an outlet for what might be termed as Nordic art and culture. My first meeting with Kaunan was when I saw them perform live at a historical festival in The Netherlands a few years back. I was instantly captured by their skillful and fresh approach to old traditional Scandinavian music. Since then they have continued to develop their style as well as their material. I feel that they represent a great artistic match for the new aims of our label.”
KAUNAN is Oliver S. Tyr (Ger.), Boris Koller (Au.) and Göran Hallmarken (Swe). Oliver S. Tyr is the frontman of the well-known German folk band FAUN. Boris Koller is a professional painter and composer who specializes in working with the old types of Nyckelharpa (the Kontrabasharpa, and Gammelharpa). He has contributed to numerous studio productions and concerts performed by various early music ensembles. Göran Hallmarken is one of the most outstanding hurdy-gurdy players on the Swedish folk and medieval music scene. The Nordic-folk trio KAUNAN breathe new life into old
traditional Scandinavian music, re-awakening the ancient realms of
pre-Christian folklore by drawing on ancient songs and tunes; odd
scales; early folk instruments like the kontrabasharpa, the hurdy-gurdy,
various lutes, the lyre, and the bagpipes; and the old Nordic myths.
As of now (2017), KAUNAN have played concerts in
Germany, Sweden, France and the Netherlands. Audiences have been
fascinated not only by their virtuous performances, but also by the
drive and archaic power that lies behind their fresh interpretations of
the old songs. KAUNAN do not simply play a Polska; they celebrate it, with almost religious passion.
The upcoming album features contributions by leading guest musicians such as Einar Selvik (WARDRUNA), Maria Franz (HEILUNG and SONGLEIKR) and the Swedish percussionist Dhani Åhlman.
Accompanied by a booklet rich in illustrations, photos and background
stories about the folklore traditions that lie behind the songs, “FORN”
will open a new previously uncharted doorway into the world of the
ancient north.
KAUNAN comment on joining By Norse Music:
“We are very happy to announce that we will release our first album
“FORN” on the Norwegian label “By Norse Music”, joining other artists
like WARDRUNA and ENSLAVED. We have a very strong feeling that our brand
of Nordic folk music could not be in better company.”