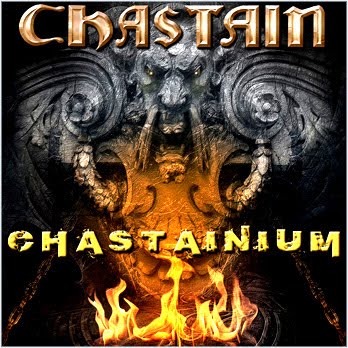 CHASTAIN has been a force in Metal for over 30 years and CHASTAINIUM is the first album to chronicle the history of the band. 2 tracks from each of the last 8 albums showcases CHASTAIN’s inventive and unique sound. The band originally put together by David T. Chastain and Mike Varney has created some of Metal’s iconic moments.

Says band founder and guitarist David T. Chastain, “I thought it was time for a CHASTAIN 101 refresher course for the fans who have been following the band for many years and also an introduction course to the newer fans who may have only became acquainted with the band in 2013 with the second coming of vocalist Leather Leone and the rebirth of CHASTAIN.”

“I went back over the last 8 albums that stretched some 30 years and picked 2 tracks from each for what I considered the best representation of that particular album. Most all of the tracks have been remastered. Some are completely new arrangements never heard before by the fans.”

David continues: “I have been blessed to have had a lot of high quality musicians and 2 great vocalists in the band over the years so there is lot to be proud of considering many of the albums were recorded with pretty miniscule budgets and limited studio time. Of course the bottom line for me is: ‘Was it an artistic success?’ I think the consistency thru the years is quite apparent even with the evolution of different musicians and bands.”

You can view the latest CHASTAIN video below