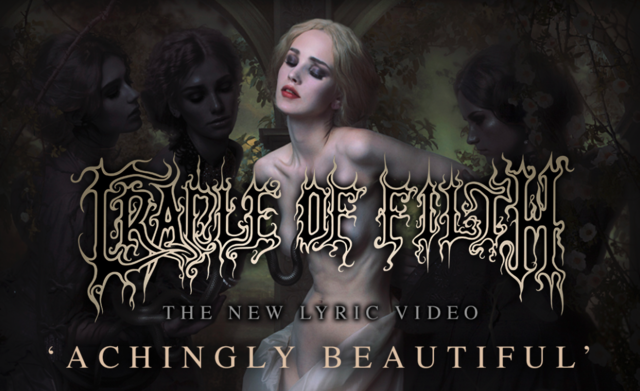 UK’s legendary extreme metal icons CRADLE OF FILTH have released the official lyric video for the venomous new song ‘Achingly Beautiful’. The song comes off the band’s upcoming album “Cryptoriana – The Seductiveness Of Decay” and you can hear it below:

Commented Dani Filth: ” “Influenced by the stories of E.F Benson, Sir Arthur Conan Doyle, H.Rider Haggard, Oscar Wilde, Arthur Machen and Algernon Blackwood to shame but a few, this song concerns itself with a spectral guest at a great masked ball who, (deeply embedded in his cruel libertine nature, attends merely for merciless, seductive sport), but instead discovers the woman of his dreams and both bewitching the other, finds in her his dark, immortal equal.

I love this song as it has a very old skool CRADLE vibe for me, both lyrically and musically, and reeking hideously of the Vampiric, the dropdown section in the middle is pure ‘A Gothic Romance’.””