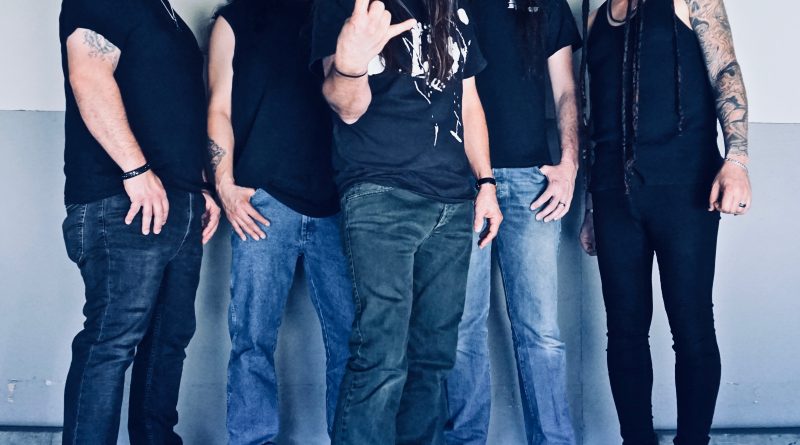 Notícias
Fevereiro 8, 2018 Fernando Ferreira 0 Comments Cultural Warfare, Thrash Metal
“It is with great pleasure and excitement that we announce Bones Padilla as the new drummer for CULTURAL WARFARE. We held private auditions several months ago and were very lucky to have some stellar drummers tryout for our band. Bones came in fully prepared and determined for his audition and just nailed it. His skills, pro attitude, and personality just seemed to fit with all of us right from the get-go. Bones is originally from NYC and was the former drum tech for Biohazard and toured with such heavyweight bands as Pantera, Slayer and Korn. We have been working together for a months now making absolutely sure, on both sides, that this is a fit. From the four of us, Jacques [Serrano – vocals], Billy [Garoutte – guitars], Pete [Aguilar – bass], and Kevin [Doughty – drums], we could not be happier to welcome our new brother Bones Padilla into our band and brotherhood! Welcome aboard!
With all that said, why the new drummer if we already have one in the band you ask? Well, as some of you may know, we have been working on finding that right guy to complement Billy as the second guitarist in CULTURAL WARFARE for quite some time. For whatever reason, it has not been an easy task… so after searching with no luck we decided that maybe we were looking in the wrong place. Billy and Kevin have been the primary songwriters in the band since its inception and have always had a great joy and love in playing and writing the tunes on guitar together. Kevin’s first love and instrument has always been guitar so Billy approached the band with the idea of Kevin making the switch and the band as a whole was fully on board with it. With that said, we would also like to announce Kevin Doughty’s switch from drum duties to CW’s 2nd guitarist. We all feel that this lineup now is the true lineup we have been seeking for quite some time and we could not be more ecstatic for what’s to come!
Well, now that we have our band’s lineup exactly where we want it we are finally announcing that we will be entering Trident Studio in Martinez, California on March 31st to start recording CULTURAL WARFARE’s first full-length. Producer Juan Urteaga (Testament, Machine Head, Exodus) will once again be at the helm. The band is extremely excited to work with Juan again as we thoroughly enjoyed our first experience with him while recording the Future Kill EP in 2016. We had a great response from it, and hope to follow up with new tunes we have poured our hearts and souls into. It will once again be released on M-Theory Audio with larger distribution this time and tours/shows to follow! Thank you to all who have supported and have been patient with us. The band is very much looking forward to 2018 and beyond. \mm/” – CULTURAL WARFARE
“I’m ecstatic about the future of this band,” states singer Jacques Serrano. “Bones Padilla has taken the drum duties and made it his own while keeping the foundation heavy and tight. Kevin switching to guitar has solidified the sound we have all been striving for and I believe the fans are in for a surprise hearing the guitar team we now have. All of this will be heard on our new CD which has the CULTURAL WARFARE classic sound but encompasses all OUR styles in the most mature growth I personally have ever seen. Let the War Begin!”
The Bay Area has a legacy for great music throughout the decades and the influence the region’s thrash metal bands played on the international scene is an unparalleled story. Well thrash metal is alive and well, as Cultural Warfare continues the area’s legacy. But more than homage Cultural Warfare are a unique combination of traditional metal and aggressive, melodic thrash metal topped by the powerful and respected vocals of Jacques Serrano (Taunted). The group released their Future Kill EP in January 2017 on M-Theory Audio, the first release from the re-launched label. Produced by Juan Urteaga (Machine Head, Testament, Exodus), mastered by Maor Appelbaum (Fates Warning, Faith No More) and featuring cover art by Brian Lewis (DevilDriver, Black Label Society), the 5-song EP showcases a promising young band’s abilities and is currently on sale at the label’s webshop for only $3 this month www.m-theoryaudio.com/store
For More Information:
https://www.facebook.com/CulturalWarfare
https://twitter.com/culturalwarfare
www.m-theoryaudio.com