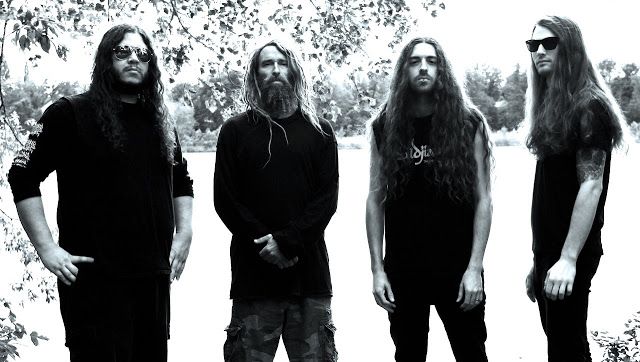 Hailing from California, U.S., the esoteric techincal death metallers DECREPIT BIRTH are set to release their first new album in seven years, “Axis Mundi”, on July 21st via Agonia Records (Europe / ROW) and Nuclear Blast Records (North America). “Epigenic Triplicity” is the first single to be revealed from the record. Listen to the the track in the form of a 360 VR lyric video below:
Formed in 2001, DECREPIT BIRTH released three studio album’s to date, which got them a premiere spot on the death metal radar. Their music, infused with technical and progressive twists, managed to forge a very solid international fan base, and continues to forge their path into the future, as one of the genre’s finest bands. Awakening from a seven-year slumber, the Californians fourth offering is entwined with musical athleticism and characteristic esoteric themes. “Axis Mundi” is as crushing as it is cosmic.
“We’ve gone through an evolution throughout the years” says founding member and primary songwriter Matt Sotelo. “The last couple of albums we had, Diminishing Between Worlds and Polarity, were more progressive death metal. They were different from …And Time Begins, which is a different genre of death metal. It’s more brutal. I’m the type of guy who likes to experiment. …And Time Begins has no solos. It’s all really fast palm-muted riffs. The other albums breathed more with the guitars. I let chords ring out on Diminishing Between Worlds and Polarity. Axis Mundi is combination of all the stuff I’m into. I like it a lot right now. It’s more melodic. The riffs repeat intentionally. I want to have fun with these songs”.
With remarkable songs, an exceptional production, and high concept lyrics, DECREPIT BIRTH will re-shape death metal on “Axis Mundi”. They’re blasting the doors of convention wide open, paving the way for future generations to explore beyond death metal’s four proverbial corners. Much like the band’s influences from the early ‘90s, DECREPIT BIRTH have different optics on the genre and what has meant and continues to mean. Of course, Sotelo sees “Axis Mundi” from an entirely pragmatic viewpoint:

“I don’t know if we’re going to re-shape death metal” he counters. “We’re just a band. We’re doing this. We’re fans of the genre. We do our own thing with it. It’s our own paint job. What sounds cool to us. We don’t aspire to be the most technical band out there. The technicality isn’t our main goal. Technicality is part of what we are. When we were writing this album, we wanted the songs that had riffs that repeat. There’s more structure with our new stuff. We’re trying to write good music. We want to entertain people out there. Hopefully, everybody likes Axis Mundi”.

The album was recorded at three different studios over the course of a year. The clarity, the power, the musicianship, and the brutality aren’t vying for attention. They’re in absolute harmony. The guitars (tracked by founder Matt Sotelo at his home studio) are razor sharp yet spine-snappingly heavy. The drums (tracked by Ryan Forsyth at Private Ear Studios in Winnipeg, Canada) are genre-defining, recalling what Sean Reinert, Gene Hoglan, and Steve Flynn did for Death and Atheist, respectively. And the bass (tracked by Sean Martinez, also at his home studio) has a great deep-end against the ceaselessly wicked rhythms. Tracks like “Hieroglyphic”, “Spirit Guide”, and “The Sacred Geometry” wouldn’t have crushed skulls and blown minds if it wasn’t for the accomplished mixing and mastering of Stefano Morabito at 16th Cellar Studios. The icing on the cacke is the astonishing cover artwork that was made by renowned fantasy artist Dan Seagrave (Morbid Angel, Entombed, The Devil Wears Prada).