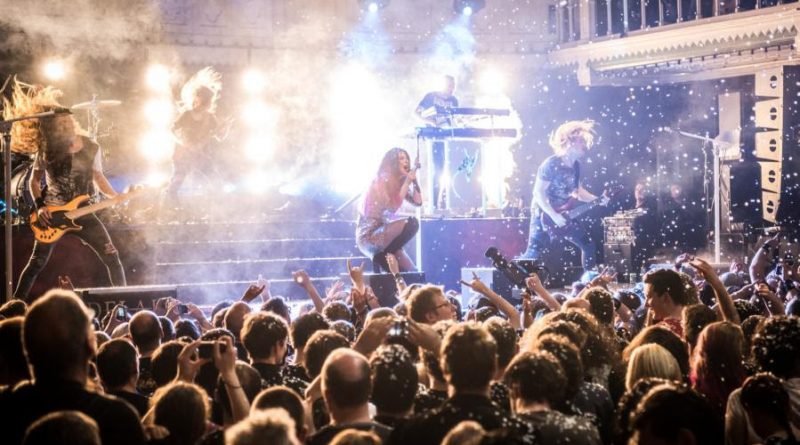 Notícias
Setembro 27, 2017 Fernando Ferreira 0 Comments gothic metal
Over the last year DELAIN have been celebrating their ten year anniversary – from the release of their fifth full-length Moonbathers and an anniversary edition of their debut album Lucidity to extensive headline tours across Europe and North America to gracing some of the world’s biggest festival stages – the band is set to cap it off with the release of their first ever live DVD/Blu-Ray package coming out on October 27, 2017 on Napalm Records!
‘A Decade of Delain: Live at Paradiso‘ was filmed at a sold out gig at Amsterdam’s legendary Paradiso on December 10, 2016. Delain was joined on stage throughout the evening by Alissa White-Gluz (Arch Enemy), Liv Kristine, Burton C. Bell (Fear Factory), and many other special guests and collaborators.
Coming as a 2-CD / DVD / Blu-Ray as well as LP Gatefold editions, ‘A Decade of Delain – Live At Paradiso‘ is now available for pre-order HERE!

The set list for the evening showcased songs spanning DELAIN‘s entire decade-long existence, including everything from the sing-along singles to cuts from the band’s vault that are rarely played live. On top of the full live concert, the package includes an exclusive documentary about the band entitled We Are The Others – A Decade of Delain, a bonus live performance of “We Are the Others” from Masters of Rock 2015, and the “Suckerpunch” music video.

Says the band: After months of planning, performing and putting together our first ever live DVD/CD/Blu-Ray “A Decade of Delain – Live at Paradiso”, we are very excited to be so close it’s release now! What to expect? Have a look at this trailer for a sneak peek! We hope you enjoy it, and we hope it makes you extra eager to experience the complete 115 minute show and all cool extra’s, including the documentary “We Are The Others – A Decade of Delain” very soon!

Check out DELAIN‘s teaser for their upcoming live release below: