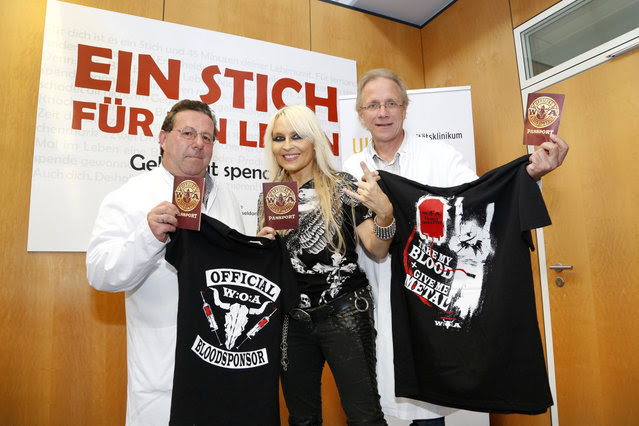 In two weeks‘ time the 29th edition of Wacken Open Air (W:O:A) will start. And live on stage will be Metal Queen Doro Pesch. On July 18th the rock star visited the blood donation head office in the university hospital of her hometown, Düsseldorf. The reason being – this year the university hospital of Düsseldorf (UKD) has become an official partner of Wacken Open Air. Metal fans can now become an official “W:O:A Blood Sponsor” at the UKD.

“It‘s a great campaign! Solidarity and support: That‘s exactly what defines the metal community. And that‘s also what blood donation is about. It saves lives with just a small effort. Each of us could one day depend on blood donation. And the official blood sponsor t-shirts surely contribute to motivating more people to join the campaign – because they can‘t be bought” said Doro Peschduring her visit to the Düsseldorf university hospital.
And that‘s how the “Wacken Blood Donation” works: when somebody donates their blood, they will get a stamp on their personal Wacken Blood Donation card, which will be handed out on request. When it‘s completely full, they‘ll receive a special “Wacken Blood Sponsor-t-shirt”.

Four out of five people in Germany depend on a donation of blood at least once in their life, or on a treatment which depends on a donation of blood. Many surgeries and therapies can‘t be carried out because there are not enough units of stored blood. Around 60.000 blood preparations are needed every year, just for the university hospital in Düsseldorf!

On the 3rd of August, Doro Pesch will stand up on the stage at Wacken Open Air, as one of the artists that are very closely connected to the festival.  Since 2009, her song ‘We are the Metalheads’ has been celebrated as one of the official anthems of the festival and this year with her latest single ‘All for Metal’, she has outdone herself!
Shortly after on August 17th, DORO‘s eagerly awaited new album »Forever Warriors, Forever United« will be released.

Get the single digitally here: http://nblast.de/DoroLiftMeUp