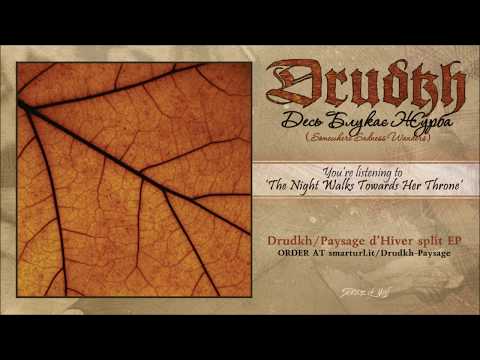 DRUDKH are
now premiering their new EP-track, “The Night Walks Towards Her
Throne”, which features clean vocals by WINTERFYLLETH frontman Chris
Naughton. The lyrics were penned by Ukrainian poet Maik Yohansen
(1895-1937), who was murdered by a Soviet firing squad.

The artwork of ‘Somewhere Sadness Wanders / Schnee (IV)’ can be viewed together with the track-list of the split-EP below. DRUDKH release their next split-EP. The Ukrainian underground black metal veterans collaborate with the Swiss atmospheric black metal project PAYSAGE D’HIVER this time.
Mastermind Roman Sayenko continues to draw his lyrical inspiration from Ukrainian poets. “All Shades Of Silence” derives from the writings of Yevhen Pluzhnyk (1898-1936), who died in a Stalinist gulag. His contemporary Maik Yohansen (1895-1937), who penned the words in “The Night Walks Towards Her Throne” shared a similar fate by being murdered with the guns of a Soviet firing squad.
Both tracks clearly show Roman Sayenko’s musical handwriting by perfectly blending raw harshness, epic melodies and a touch of folklore into black metal masterpieces.