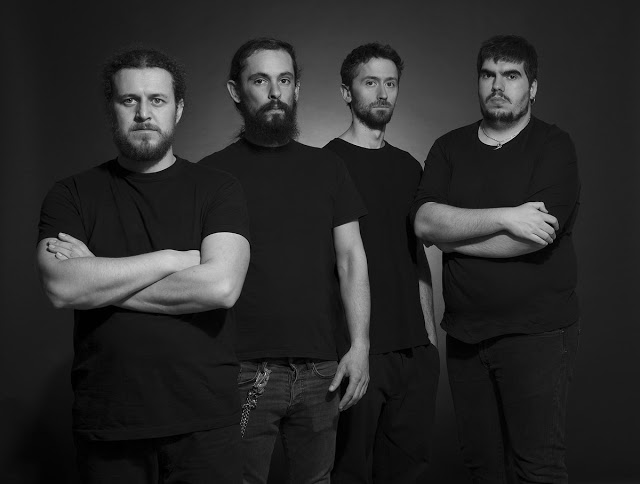 The impacts that you remember in your life and the ones that are more powerful are the ones you wouldn’t expect. We can say that the debut album of the spanish post-rock/prog/instrumental band Firmam3nt fills that category with perfection. One of our album of the month and definitely one of the greatest new bands coming from Spain are more than enough reasons to get to know them better. Guitar player Alberto Garcia was Firmam3nt‘s spokesperson.
WOM – We only got to know you recently but your debut album had a great impact on us. How have been the reactions to it so far?
Alberto – First of all, thank you so much for this interwiev, all kind of support is very important for us. The people´s reaction has been better than expected.  It´s our first álbum and we are impressed by the reception. Always have doubts about things that you think may be better but we have tried to do our best.
WOM – What was your main reasons to do instrumental music? Don’t you think that with instrumental music, the pressure is bigger? You got no “disctractions” from the vocal melodies and chorus….
Alberto – Maybe you´re right but also instrumental music allows you to do another kind of music structures because there isn´t a chorus or something like that, the songs go through differents states without any need to repeat anything. You have to play with the dynamics in each part to get the people feels the song like you want.
WOM – Post rock and post metal definetey come to mind when listening to your music. What are your main influences?
Alberto – We have a lot of influences. Jorge, our drummer, plays differents styles in other projects which he uses in Firmam3nt, metal, jazz, funk, pop, etc., also the bass player Sergio.
WOM – Four tracks that are connected to each other. It seems obvious that there’s some kind of concept around the four tracks, is that true?
Alberto – Not really. We composed them at the same time but we have not any idea about the concept of the album. In that moment, the band was formed by three of us and we have only a purpose, that it was play together and have fun.
WOM – Do you plan to play these four tracks live or is Firmam3nt a studio outfit only?
Alberto – We have thought to play as much as we can. It´s complicated for differents circumstances, mostly work issues, but we´ll try.
WOM – About your name, what does it mean and also, tell us a bit of your story
Alberto – The band was formed three and a half years ago by Txus, Jorge and me. The idea it was to play only with guitars and drums, a disfunctional power trio using octave pedal, loop pedals etc, with the intention to emulate the bass guitar.  After that, we started with the songs and we realized that we need a bass player (laughs). After  a failed attempt we finally found Sergio and six months later we recorded our first album. About the name.  It was and idea that we had during the composition. It´s an abstract and broad term that allows to us multiple options.
WOM – Nowadays it seems that we have more and more bands releasing albums on their own. This was by intent or simply last resource.
Alberto – From the beginning it was our first choice. We had some support by our friend Alex from Nooirax Producciones. Some of us  had previous experiences with record labels, and finally it´s the best choice. Nowadays everybody has a lot of options to spread their music. I don´t want to say that the record labels are a bad choice, but I think there are another ways.
WOM – Always felt music as a type of escape to the “real” life. Considering all that we have today, government corruption, financial scandals, terrorrism, do you think or feel that music can make us bear all of this? And going a bit further, can it change the state of the world?
Alberto – I Totally agree. We are from Spain, a country where the corruption and all kind of political stuff is the shit, so you can imagine all the bad things that we have to deal with. The music is our way to escape from all of it. I don´t know  if it can change something but I hope so. It´s totally necessary that something happens and we change the way we do things.