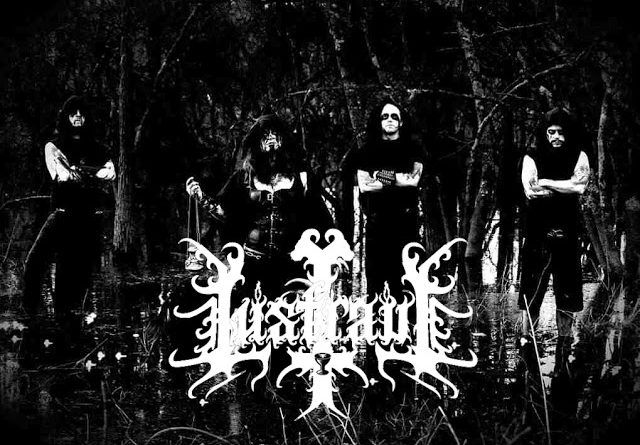 Lustravi‘s debut album is proof that the USBM is always a good source for quality black metal, always paying respect to the classic sound of the genre but also adding its own personality and identity. We decided to get to know them a little better and Morgan Weller received us and kindly answered our questions
WOM – What is your opinion on the Black Metal Scene of today?
Morgan Weller – I think there is a lot of great bands coming out now. In the
US where we are from, there are a lot of great black metal festivals with
extremely underground bands that we are extremely proud to wage war beside.
Stahl Gorthorl, Eldre,  Secrets She Kept,
Led by Serpents, KAV, and Promethean Horde are all bands that I implore any fan
of black metal to check out and all are fantastic examples of what the
southeastern US can produce in the midst of the bible belt. On the other side
of the coin, there is definitely a growing trend of bands i can’t respect
because there are some who will simply add “black” or “blackened” at some part
in their genre while having no idea what it means to be black metal. Black
metal is a sacred thing for people who are truly passionate about it and it’s
easy to weed out the warriors from the weak.
WOM- Do you think that sometimes the ones who try to be more
“kult”, are the ones with the wrong idea of what Black Metal is supposed to be,
and its true origins?
MG – This is a tough question. On one hand, i think that metal
needs its elitists for a certain level of quality control and keeping our
traditions alive as a whole (which I believe also applies to death metal as
well).  We need the people who demand
bands to be passionate on their war path, the people that know their shit, for
lack of a better term. I believe that black metal is and always will be driven
by hatred and opposition of the religious hierarchy, but i am not the kind of
person to only listen to black metal in the 90s and disregard everything else.
What i hate, is people who chose to be followers and cling to ideas of black
metal that were not neccessarily in its conception.  There is a fine line between giving your life
to something because it is everything you believe in, and being a douche to
people who are new to it (fans and bands alike) and i think that is the
fundamental difference between the people who claim to be kvlt and people who are
truly obsessed with black metal and the left hand path.
WOM – How would you describe the Black Metal you play? Why is
it called Cerimonial Black Metal?
MG – Our music sounds like years of suppressed hatred of abrahamic religion that each member of Lustravi has experienced in separate ways. We are called ceremonial black metal because each song is part of a ritual; it has everything to do with the content of the music and how we present ourselves in the live setting.
WOM – With Your first full-length being released almost one
year ago, are you planning on getting in the studio soon?
MG – We are currently writing our second full length album, and
we are taking our time with it so we produce exactly what our vision is. I can
tell you for sure that it is turning out to be a much faster and more punishing
album than “Cult of the Blackened Veil.” We’re also currently looking for our
next label which is giving us time to really focus on the important parts.
WOM – What were the reactions to the record, through this
year?
MG – So far, we’ve had overwhelmingly positive responses from zines, reviewers, fans, and fellow musicians. We were the top selling band on our last label, Obscure Musick, and we managed to sell out of our own stock of CDs as well. With Cult of the Blackened Veil, this was the beginning chapter in hopefully a long line of releases that we hope our fans will continue to support.

WOM – With a US summer tour already booked, are you planning
on coming to play in europe? If yes, is Portugal included?
MG – Unfortunately, at this point, we do not have any European
tours planned, however it is definitely something we have been researching and
definitely something we want to do as soon as the opportunity presents itself.

WOM – What can we expect of a Lustravi live show?
MG – Every live ritual starts with an invocation and I pour blood
on myself.  I address the crowd as a
congregation, with speeches in both English and Latin. Depending on where we
are we also have friends that do live blood letting and bondage. We have burned
incense, annointed people with oils, we’ve impaled the head of jesus on a
railroad spike on top of a cross we made and branded sigils into, weve burned
bibles, ive thrown eucharist at people, and plenty of others.  Really, it all depends on the ritual itself.
Some nights it takes a darker turn than others, but we pride ourselves on being
the band that either offends everyone or is disturbing enough that people cant
look away.
WOM – To finish with, do you have anything to say to Lustravi
fans in Portugal and World of Metal readers?
MG – I just want to say thank you a million times over for
supporting Lustravi! And please feel free to follow our Facebook page
(facebook.com/lustravi) for upcoming news on tour dates and new releases.