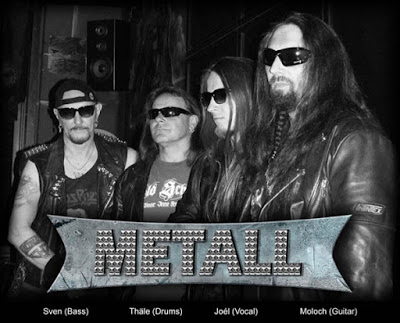 Metall are a veteran band even though they only now release their debut album. Their sound has a classic feel that with a modern production gives us a great album for all lovers of the old school tradition of german heavy metal. To get to know more about them, we’ve gone and asked some questions that were kindly answered from the teutonic heavy metal band.

WOM – Congratulations for your debut album. It’s really strong and it pours metal from everywhere. Proud of it?
Metall – Oh yes we are. It was indeed a long rebirth-process.

WOM – As far as we can tell, you started your carrer in the eighties, changed name and came back to Metall a few years back. Can you please give us a brief account of your history and why you decided to return?


Metall – Well, Metall has been restarted in 2014 by the founder Sven Rappoldt and the drummer Marko Thäle in 2014. Sven always wanted to give Metall another chance, but it was hard to find members who fit together, not only on a musical level, but also interpersonal.
WOM – You have a real powerful sound, almost thrash metal. What you consider yourselves, heavy metal, power metal or thrash metal?

Metall – We have no interest in doing just thrash nor heavy. It is the mixture of different styles that defines us.

WOM – Is this the album you could have released back in the eighties?

Metall – Actually no. In the 80s GDR time we were more of a True Metal band and in the late 80s it was kind of a melodic US Power Metal stuff. So we changed a lot.

WOM – We can expect to see Metall live and releasing more albums? You’re back for good?

Metall – We do hope to have some gigs out of germany in the future. We have not planned anything, yet. If the people will like our record, we would definitely play some shows in other countries of Europe. Right now we are in another creative stage, so we write new songs and then we play some gigs in germany. We will see what the future brings.

WOM – What about influences, what are your main influences?

Metall – Well, every member has kind of his own influence. Our guitar player Moloch and our drummer Thäle both come from the harder Thrash and Death scene. Our Bass player Sven is more into the Heavy scene, through his Metal pup „Halford“ and our vocalist Joel likes the progressive Rock and Metal scene what kind of explains his ambitions to vary his voice. When it comes to us as a band we would call Megadeth, Pantera, Black Sabbath ans probably some Maiden.

WOM – Thank you for this interview, we wish all the luck in this second life. Any last words?


Metall – No we have to thank you for the possibility to answer your questions. Without magazines like this one the metal scene would not be as strong as it is now.