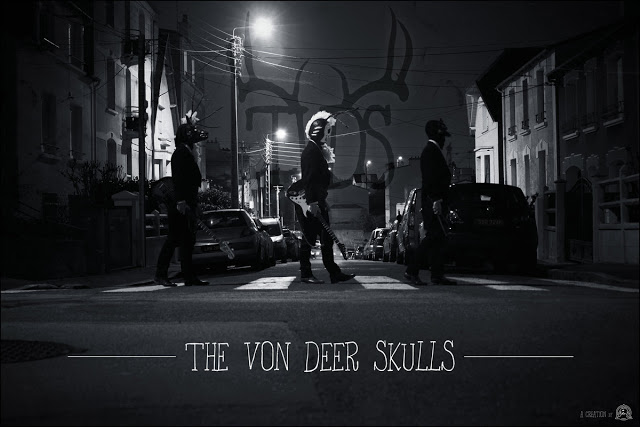 The Von Deer Skuls have not an immediate sound. No easy listening is to expect in “The Rest Is Silence” even if you used to expect the unexpected. More than a good record, it’s an experience that begs to be seen live for all the theatral side of it. And there’s a sense of mystery surrounding this band that obliged us to know a little more. And we did it. Thanks to Mr. Peter Von Deer Skull

WOM – “The Rest Is Silence” is an interesting work of experimental music. How have been the reactions to it so far?
Peter – Reactions are generally interesting, it’s pretty good. But what it’s really fun is that it’s either positive or negative. It’s not really balanced and a bit exaggerated, some say crap other say genius. It seems that isn’t an album that let people indifferent, and I guess it’s something great.

WOM -Your sound is very diverse, with various elements of various elements. How would you describe it?
Peter – We have described it as Post Doom Metal, but that is a tag that doesn’t totally describe us. We have to put ourself in a box to “sell it”, it’s a difficult thing to do, because we’re mixing various elements as you say. We have called this Post Doom Metal, because our sound is something like a blend of Doom for the heavy slow repetitive riffs and Post Metal for the kind of ambient, atmospheric and brutal elements. But we’re more than that, we’re also indus, progressive, sometimes electro, I have no real limits when I’m composing. We test some things and see if it’s work.
WOM – How deep is the importance of the lyrics or the conceptual side in the album as a whole?
Peter – Lyrics are and aren’t important. I mean, sometimes it’s more poetry with nice sentences, but it’s a whole, a story. Like it’s said in the digisleeve: “It’s an album about madness, about the birth of the freak. It’s about the alternate versions of ourself. The incarnations of the band characters. In front of this imaginary and lonely kingdom, with falls, rises and confrontations. It’s him, lost in this strange world”. It’s just a way to stage a red wire that explain how lost and mad we can all be sometimes. In a beautiful way I mean, more cathartic. The lyrics answer to another all along the album. Every person put on it the sense that they want, it’s not mine, mine are often different, but that the cool part of lyrics. You can also find some blink to Poe, Bukowski, Shakespeare or Céline in our lyrics…
WOM -What I found most intriguing was the atmosphere. Are you satisfied with the overall result or do you think that there’s some details that could have worked out better?
Peter – I am satisfied. I have more to said in the future, or said something else or different. But I love the atmosphere of this one. We can always do better, maybe improve some details… But in fact I love the details of this album, I love  mainly its faults. And each time I make a record with The Von Deer Skulls that is a statement of the old Von Deer Skulls, it’s what we are the year before, during the writing and recording of the album, not what we are necessarily at the moment of the release of it. I’ve already new ideas of what to do with the future of the band, it’s have to evolve, but I think of it.
WOM -How about expectations. What you expect to achieve with “The Rest Is Silence”?
Peter – With this one I wanted to do something less experimental than before, with a heavier sound and less Lo-Fi, and yes it’s by far the less experimental work of the band (Laughs). But also in keeping the different approach of music that the band can have. I wanted it loud and clear at the same time, have some compact and repetitive riffs with some more atmospheric parts, and mix it with some ambient backing guitars or keyboards. I also wanted more agressive vocals and less spoken words than before, it’s how that record have to sound. It’s our first long play, so it have to be different and an evolution for the band.
WOM – Being so adventurous and with a sound so diverse, so must be your influences. Is that correct? What is the most unexpected influence that had impact in the music’s writing?
Peter – In the case of The Von Deer Skulls, the most unexpected influence, for peoples not for the bands, is that our music is like a soundtrack for our own universe. It’s cinematographic because I want to work with all medias at the same time, sound come with videos, graphism, vice versa. It’s not just music, it’s also art in general, influence can be paintings, movies… We love different kinds of music in the band from Jazz to Brutal Death, and Electro, Doom, Prog… in between.
WOM -Your sound seems quite complex to play live. Are there any plans to bring “The Rest Is Silence” to the stage?
Peter – Good question, we are currently working on it. See what we can do, choose what songs to play, and sample some parts, rearrange some other to have more impact in live. We have a lot ideas, but we take the time to do it well. When it will be time we’ll present what we expected about The Von Deer Skulls in live. But yeah, it will be a little different, because it’s not the same experience than on album.
WOM – Thank you for this interview, any last thoughts?
Peter – Haaa, the hardest question. First, thanks for your review and for this interview. And, humm, be patient, it’s just the start. We have a lot of things to share with you, we work on the live, work on new things, but for now the next step is definitely live. And if you want new sounds, we have released a new single (‘Personal Hell’) with two outtakes of ‘The Rest Is Silence’.