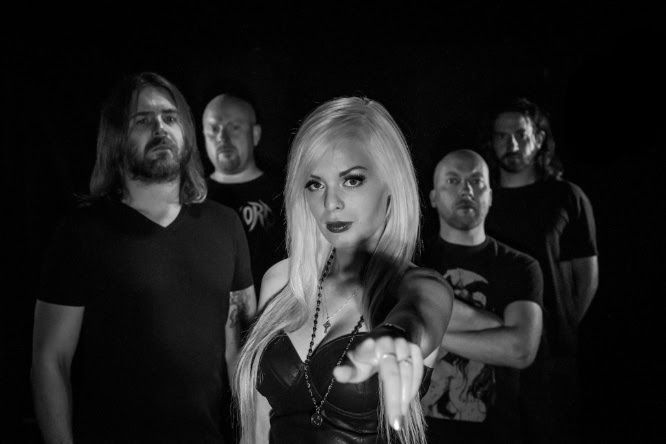 Almost a year on from the release of their debut album, “Altars”, and following an acclaimed set at Bloodstock festival this past weekend, KROH have returned with a brand new release that showcases the Birmingham-based five-piece at their best. “Pyres “will be set free into the world on Friday, October 13, 2017 via Devizes Records.
Primary songwriter and KROH mastermind, Paul Kenney, has demonstrated his eclectic influences on this latest release as he aims to match Portishead with My Dying Bride, Adam and the Ants with Mayhem.  The indelible blueprint laid down by his previous bands – Mistress and Fukpig – have been overlaid by a desire to create something with a much more pop-oriented vibe.
Paul comments “The track Rigor Mortis came from an At The Gates type riff that Paul (Harrington, guitar) originally wrote for Anaal Nathrakh. In its original form it was twice the speed and meant to be played over blast beats. I was trying out an idea that I wanted to be like a Bangles song – so we slowed it down to half time, and got the song I had envisioned. The whole release comes from a mindset of thinking about what Mayhem’s De Mysteriis Dom Sathanas would sound like minus blast beats, and put into a pop format with clean vocals.”
Whilst they may wear their influences boldly on their collective sleeve, KROH have created something unique; Pyres is heavy but accessible, cathartic but melodic. Much more than a token nod towards a catchy chorus, pop music runs through the veins of Pyres and much thought and consideration has gone into the structure and composition of the album that the band say was created during a time of “depression, anxiety and personal struggle.”
Vocalist, Oliwia, comments: “It was an honest and cathartic process. In the past few months I repeatedly asked myself the following question: how can one use profound suffering as a catalyst for growth, instead of allowing the daily struggle to drain one’s vitality? I didn’t find any satisfactory answers, so I wrote lyrics about it instead.

“The lyrics are a medley of thoughts and reflections regarding various types of pain. I used themes of mental agony, the existential angst and the inevitability of death to explore the manner in which suffering can shape the human experience. Nemertean Girl talks about duplicity, and is a reminder that hiding inner malevolence will inevitably lead to the perpetrator’s own demise.

“I wanted the vocal melodies to be unpredictable; sweet and alluring like a siren’s chant at first, but piercing and dominating as the songs unfold. It was never really my priority to make people feel good when listening to the tracks. Instead I would rather the listener to feel intrigued, inspired, or even uncomfortable.”
KROH is the brainchild of Paul Kenney, a former member of Mistress, and founder of Fukpig. He reunited with his former Mistress band mate, Darren Donovan (also ex-Sally and current Burden of the Noose bassist), plus recruited Rich Stanton (also of Burden of the Noose), Paul Harrington and Oliwia Sobieszek to complete the line up.