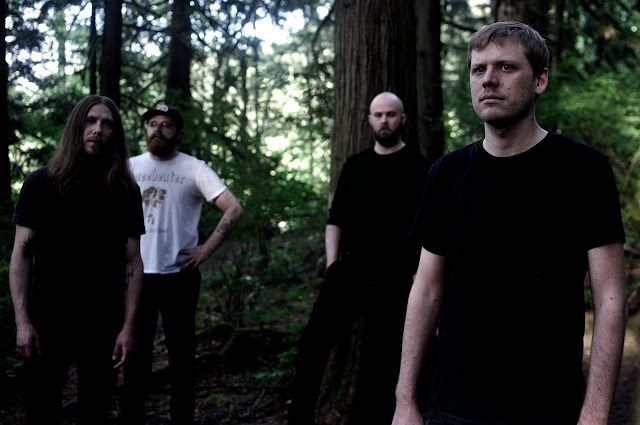 Portland, Oregon’s favorite science fiction stoner doom outfit Menin is proud to announce its allegiance with San Francisco’s Doom Stew Records to release the EP Lord of Pain on CD and 12″ vinyl September 15th.
Menin‘s power has rarely been glimpsed outside of the Pacific Northwest until now.  Two drummers, downtuned guitar, and towering bass bring about an involuntary slow-headbang with interlocking polyrhythmic riffs.  The unhinged vocals of guitarist Chris Gray serve to further disorient and disturb the listener.
Lord of Pain launches Menin’s unrelenting heaviness into the farthest corners of the universe for all but the deafest of heshers to behold.  Each track explores the power and wrath of creator/destroyer gods from works of science fiction and fantasy. “Lord of Pain”‘s title track is named for the Shrike from Dan Simmons’s Hyperion Cantos: a 10-foot-tall, four-armed, time-traveling monster made of knives.  Fellow science fiction fan and riff warrior Matt Stikker provides a horrifying illustration for the cover art, as he has done for the likes of Lord Dying, Drouth, and WVRM, among others.
“Lord of Pain” will be available on CD, digital download, and vinyl September 15th through Doom Stew Records.  The 12″ vinyl also contains the previously-unavailable single Entheogen, an anthem to the sweet leaf.