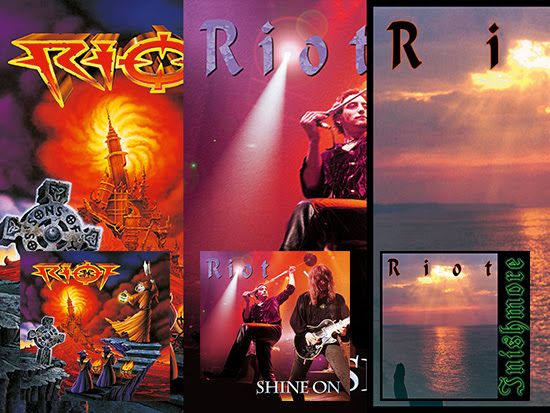 Over the past couple years Metal Blade Records has re-issued a whole bunch of RIOT albums on Digi-CD and vinyl. On June 30th the next three titles will be added to the rich catalogue of this fabulous band. ‘Inishmore’, ‘Shine On’ and ‘Sons Of Society’ are two studio albums and a live album that can easily be described as melodic power metal gems!
‘Inishmore’ will be available on Digi-CD with four bonus tracks (’15 Rivers’, ‘Red Reign’, ‘Danny Boy’ and ’15 Rivers (acoustic demo)’ as well as on vinyl in four different versions (180 g black/night blue violet marbled/lime green/clear dawn red (US-exclusive)).
‘Shine On’ will be available on Digi-CD with the ‘Live At Club Citta January 31st, 1998’ DVD as bonus. The DVD features a full live show as well as extra live clips and video clips, 31 titles in total!
‘Sons Of Society’ will be available on Digi-CD with five bonus tracks (all instrumental rough mixes of album songs) as well as on vinyl in four different versions (180 g black/clear orange-red/purple blue/orange-brown (US-exclusive)).
All three albums have been remastered by Patrick Engel for the best sound quality ever. The vinyl versions include 350 g covers, an insert and a free poster each, the Digi-CDs poster booklets.
Pre-Order your copies now at metalblade.com/riot
Support World Of Metal
Become a Patron!
World Of Metal Magazine – Agora Grátis/Now Free!
Buy CDs in our store