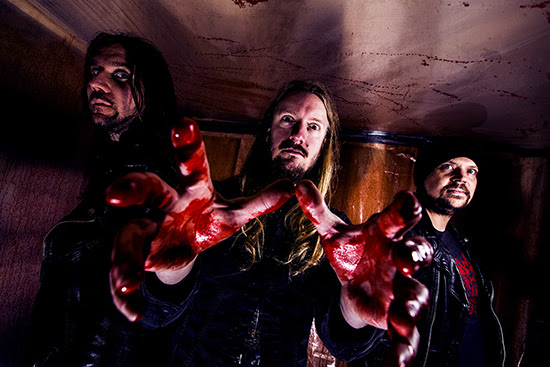 In the dirt where fallen icons lay to rest, the maggots and seeds spawned in 2014 a new creation. This took the ugly form of LIK, which fittingly means corpse in Swedish. An un-dead creation which offers a plate of savory old school death metal.

Metal Blade welcomes LIK to their roster. Comments LIK: “The huge impact Metal Blade has had on the scene is something you can’t overlook and being a part of this family is a ‘pinch yourself to see if you’re dreaming’ scenario! We can’t stress enough about how psyched we are and it’s just another sign that no frills death metal is still alive and breathing!”

Walking the earth for three cold winters, and with the first offer named ‘Mass Funeral Evocation‘, it’ll have a sister released in May of 2018.

LIK has no passage as this entity is devoted to make an permanent mark in those who lay down their souls to Rock’n’Roll. The possessed souls to carry out the sonics are Tomas Åkvik (Guitar/Vocals), Niklas Sandin (Guitar/Bass) and Christofer Barkensjö (Drums).