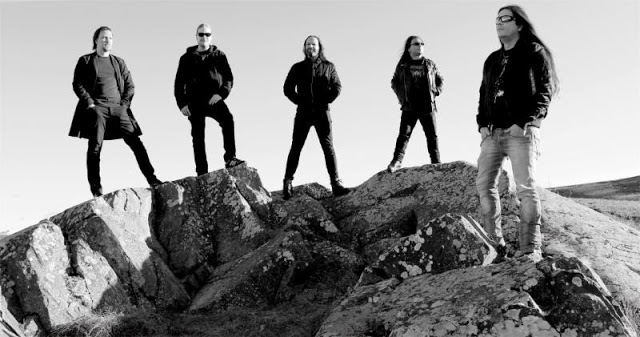 Legendary Swedish Death Metallers Sarcasm have released the official video for “Scars of a Land Forgotten,” a track from forthcoming “Dark Descent” album “Within the Sphere of Ethereal Minds”. Death awaits below

“Within the Sphere of Ethereal Minds” will be released April 28 on Dark Descent Records. Pre-order it at this location.
Following the unearthing of their first proper full-length, “Burial Dimensions” (originally recorded in 1994 and officially released in 2016), the new long player is in a sense the payoff of a long, bumpy history that included demos, compilations, and an EP (“Scattered Ashes” in 2000). Indeed, it is the full realization of Sarcasm‘s blackened Swedish Death Metal sound, yet with an identity all its own.
While the music of all eight tracks was written by guitarist Peter Laitinen, he somehow did find that perfect balance in between that very specific sense of melody that could only be summarized as ‘typically Swedish’ (fans of the early No Fashion records catalogue will know exactly what we mean here), raging speed and brutality. With one foot firmly planted in the mid-90’s and another in the present, Sarcasm is no nostalgia trip, but a genuine return to form to that specific mix of black and death-metal, before saccharine riffing and cheesy clean vocals took over and ruined it all. Moving from the melancholic leads of “Embodiment of Source,” they answer with the blast-o-thon that is “Scars of a Land Forgotten” or the epic-to-kill-all-epic that is the eight-minute-plus “A Black Veil for Earth.” Track List:
1. Bloodsoaked Sunrise
2. From the Crimson Fog They Emerged
3. Embodiment of Source
4. Scars of a Land Forgotten
5. In the Grip of Awakening Times
6. Silent Waves Summoned Your Inner Being
7. A Black Veil for Earth
8. The Drowning Light at the Edge of the Dawn
Support World Of Metal
Become a Patron!