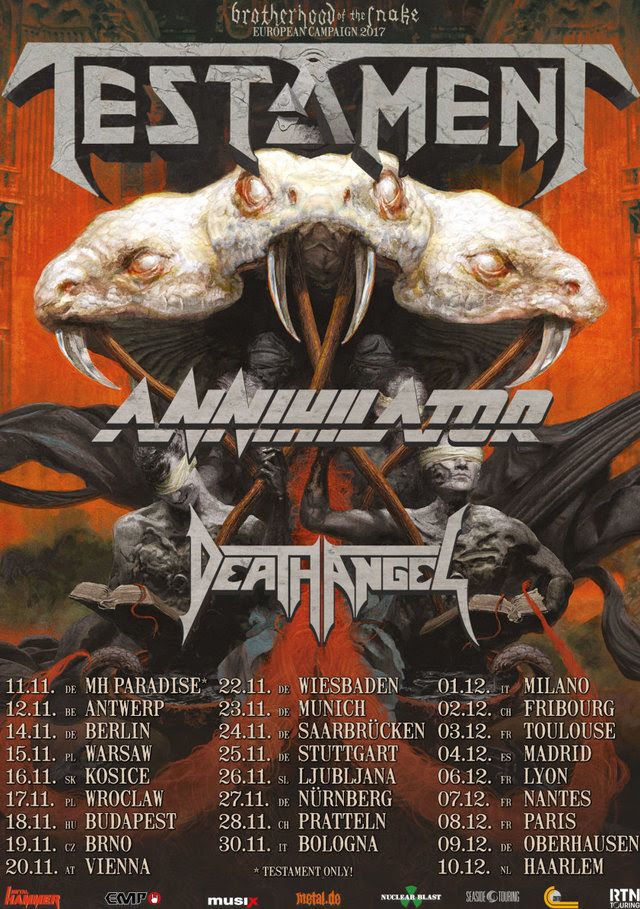 Bay area thrash giants TESTAMENT have announced to bring the “Brotherhood Of The Snake” headline show to European shores this winter.
The band will be touring in support of their latest album. “Brotherhood Of The Snake” received raving reviews from all over the world and hit the charts in numerous countries upon its release in October 2016.
TESTAMENT will be supported by fellow thrashers ANNIHILATOR and label mates DEATH ANGEL in support of their latest release “The Evil Divide”!
Commented TESTAMENT singer Chuck Billy: “I am pleased to announce the “Brotherhood of the Snake” headline tour coming to Europe in November. It’s going to be a thrash extravaganza with TESTAMENT, ANNIHILATOR and DEATH ANGEL. This invasion is gonna devastate.”
Added DEATH ANGEL‘s Mark Osegueda: “It has been way too long since DEATH ANGEL has toured in Europe…A fact that we are none too pleased about… So… It is with tremendous pride, and excitement that I can say DEATH ANGEL is FINALLY coming back in support of our latest record “The Evil Divide”! And we plan on delivering a devastating set night, after night, and stage after stage to our most dedicated, and loyal fans! Come out and let’s feed off of each other’s energy!!! Together we can, and will create, and celebrate unforgettable nights of the undeniable power that is METAL! See you on the road! See you in the pit!”
​
Support World Of Metal
Become a Patron!
World Of Metal Magazine – Agora Grátis/Now Free!
Buy CDs in our store