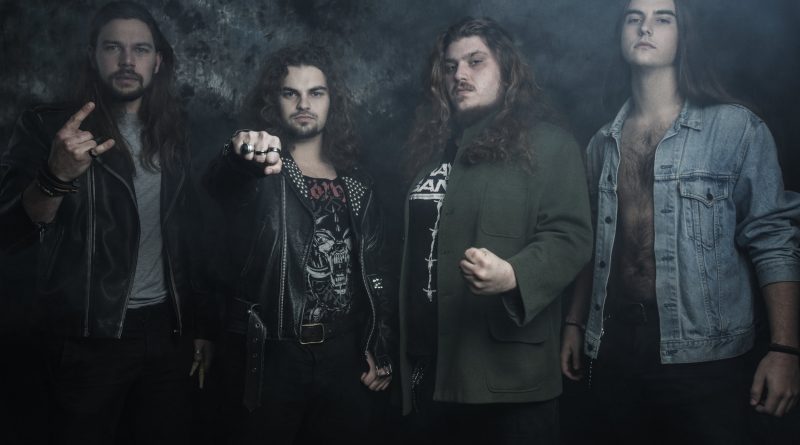 Portuguese speed metal act Toxikull will release their new record, “The Nightraiser”, on march 23rd via Mosher/Firecum. Clocking in at 26 minutes and six songs, the sucessor of 2016’s “Black Sheep” features a cover of Hollywood Rose’s “Rocker”. “The Nightraiser” is a relentless sonic attack that evokes the best elements that made heavy, speed and thrash metal so popular: impressive vocals, a tight rhythm section, blazing guitar solos and carefully crafted melodies.

Frontman Lex Thunder (also vocalist for Midnight Priest) states about the new CD: “It’s an appeal to rebellion and some social criticism. Music-wise, this EP is a bit different from ‘Black Sheep’ – it’s faster, stronger and more aggressive. The influences of the music from the past are also a bit different, this one’s a more on the speed/heavy metal side.”

Recorded at Ultrasound Studios Moita (Hugo Andrade), “The Nightraiser” features a Hollywood Rose cover (“Rocker”), a demo from the early career of rock n’ roll royalty Axl Rose: “I always thought it was a killer tune, living off the spirit of rock n’ roll”, Lex says. “Unfortunately, this brilliant song never got a proper recording, so we took the chance and did it ourselves, and recorded it the way we wanted it sound”.

The pace is high and Toxikull promise to take no prisioners during the promotion for “The Nightraiser”. An advance single will be released this month, and an official videoclip will come shortly afterwards. The fine jewelcase edition will be available for pre-order through Mosher Records and Firecum Records websites, and the digital version can be streamed or bought through the most popular digital platforms and marketplaces.

About the cover:
Painted by the italian artist Velio Josto, the art meets the band’s idea: something pure, actually painted in ink and without any digital effects. The choice for Josto was a no-brainer after the Toxikull members saw the artist’s work for the band Vulture, and were very pleased with what they saw.

The cover’s story is deeply connected with the record’s first track “Nightraiser”, in which the creature takes charge: “it represents the night, the rise of pure and bloody justice taking its toll on the fake spotlights of the day life; the night swallows the dawn and its false sins”, says frontman Lex Thunder. “It’s not a creature that kills for pleasure or without a motive. It’s a cleansing a universe in which death comes in its natural habitat, the night, and undresses all souls of their essence, eliminating those who live in the blindness of the daylight. We can say it’s a social metaphor, and yet another call to rebel against abusers and false entities, be them persons, institutions or even tendencies”, he adds.