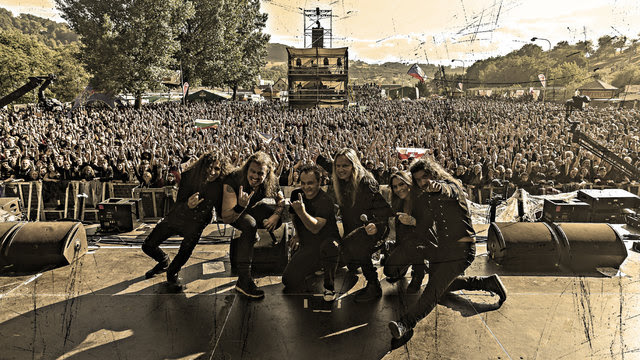 ALMANAC – release the live clip for ‘Children Of The Sacred Path’

ALMANAC – the new band of Victor Smolski (ex-RAGE) – are set to release their sophomore record titled »Kingslayer«, on November 24th, 2017 via Nuclear Blast. The limited first edition of the new album will also include a bonus live DVD, which presents their show at this year’s Masters Of Rock Festival. At the festival, the band debuted two new tracks live, ‘Losing My Mind’ and ‘Children Of The Sacred Path’. Three weeks ago the band released the music video for ‘Losing My Mind’, which is also the first digital single off of the new record. Today, the band unveiled more insights into the upcoming album with the live clip of ‘Children Of The Sacred Path’, which will be included on the bonus live DVD!

Victor comments on the clip: “‘Masters of Rock’ is one of my favourite festivals and for that reason we wanted to present ‘Children Of The Sacred Path’, a new song from the second ALMANAC album »Kingslayer«, for the first time at this festival. Heavy rain before our show caused a lot of trouble in regards to doing our line check, so it was very difficult to achieve the perfect sound on stage. But in spite of the bad weather conditions, our fans gave us great support and I was happy that the video cameras were still working!”

AUÐN have released the third stunning track taken from their forthcoming album, ‘Farvegir Fyrndar’, which is scheduled for release on November 10th. The song “Veröld Hulin” is now streaming  below:

AUÐN comment: “The title of the opening track of our new album, ‘Veröld Hulin’ roughly translates as ‘Hidden World’. It marks the beginning of the journey that takes you through ‘Farvegir Fyrndar’. We welcome you to join on along the way as release of our album draws near.”

DIE TRYING ARE BACK – watch “No Shame” their brand new video

“No Shame” is the single taken from the bands upcoming third EP “Ducal Rod” which will be released on November 6, 2017 via CBC Records. The album was recorded, mixed and mastered by Stefano Santi at SPVN Studio.