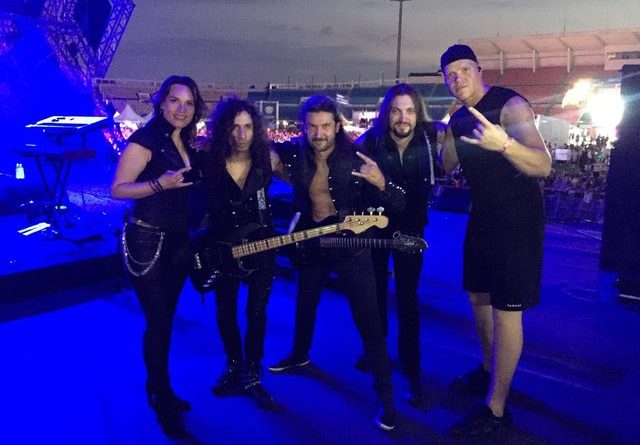 ALMANAC recently finished off their 2018 festival season. To celebrate, the band has launched a bunch of live videos from their great gig at Milagre Metaleiro Festival, to give fans at home an idea of what they’ve missed. Check them out below!

States Victor Smolski, “This year’s summer festival tour was amazing! We played a fantastic stadium show at JUMF Festival in South Korea first. This concert, including an outstanding light show was recorded for a DVD release. The ALMANAC machine has never run as well as it did there! Afterwards we headlined Milagre Festival in Portugal, where our new vocalist Patrick Sühl proved once again, that he can replace our former singers David Readman and Andy B. Franck perfectly and that he really knows his own style. Last but not least we were invited to perform at my favorite festival of this year’s season – Werner Rennen. I could work with my racing team there for 4 days on 2 tracks at full throttle too. We even brought one of the trophies home. On Sunday, ALMANAC performed at Kesseldrom Stage and had lots of fun with our fans! Thanks to every single one of you for the immense support! See you on our next tour, which is already in progress!”

THE MONOLITH DEATHCULT unleash lyric video for ‘Fist of Stalin’

Dutch avant garde death bringers THE MONOLITH DEATHCULT are releasing a brand new album entitled ‘V2 – Vergelding‘ (“Retaliation”), on November 30th via Human Detonator Records. The follow-up to 2017’s ‘Versvs’ represents the Second instalment of the V-Trilogy and deals with the aftermath of the events that formed the theme of the first part.

The band is now unleashing the track ‘Fist of Stalin’ in the form of a lyric video, crafted by Aimed & Fraimed. Watch it here:

THE MONOLITH DEATHCULT‘s Michiel Dekker comments: “Fist of Stalin is the first single, but not because it is a brilliant song. Every song we put out is great, I know it because I wrote them all. Fist of Stalin is a deadly hybrid between the finest Metal of Death and the nastiest Industrial from the Psalm 69-era. This is death metal at its most avant-garde form, an escape from the realms of incompetence”

Sydney symphonic black metal band Tamerlan Empire has signed to Australian promotion, booking and management agency Black-Roos Entertainment. The band has released their first full-length studio album Age of Ascendency in February this year and their lyric video Battle of Tyrantsrecently. They have just supported Enslaved in Sydney and are bound to support Sinsaenum in November. The band is playing shows around Australia and is planning to take their distinct music overseas in the near future.

Tamerlan Empire is playing a fusion of symphonic black metal with Central Asian and Middle Eastern melodies and rhythms. The style of the band was developed by blending the aggressiveness of metal with an eastern-sounding tone that reflects Tamerlan Empire’s ideology and creates a unique sound that identifies the band.