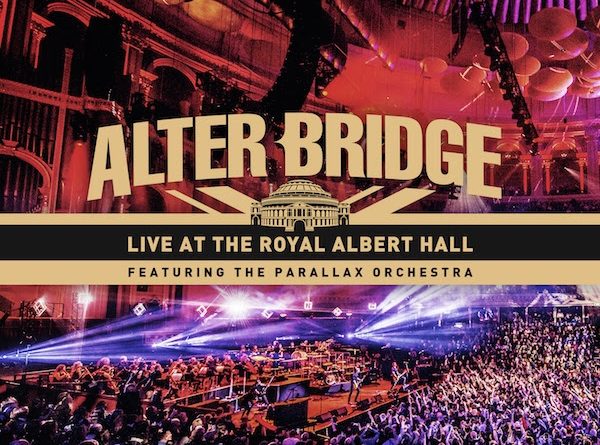 After 14 years performing together, five full-length studio albums, and countless sold-out shows around the globe, there aren’t many items left on a band’s bucket list. For Alter Bridge, one of the remaining list items was crossed off in October 2017 when the band performed two sold-out shows at London’s iconic Royal Albert Hall backed by the 52-piece Parallax Orchestra led by conductor Simon Dobson. Those career-defining shows were captured and combined in the upcoming Napalm Records worldwide release Live At The Royal Albert Hall on September 7th.

“I think out of all the years of doing this [music], this experience is the top two or three highlights without a doubt. It’s something that none of us are going to forgot,” explains Myles Kennedy in a recently released trailer that can be seen here:

Taken from their Top 40 album, Born To Break, the accompanying lyric video encompasses  shots of the band doing what they do best; playing live in front of an audience, with the pictures representing their continued European onslaught. All pictures courtesy of Geordy Van Velzen/Photography Fidelis and Marty Moffatt.
͞”Whatever Gets You Through The Night” is a song about just letting go, and being yourself. Says Guitarist/Vocalist, and principle songwriter, Gill Montgomery ”We are hoping it strikes
a chord with listeners, and that it can relate to their individual experiences, and they can use it as an anthem to help celebrate how they live their own lives.”
With the release of Born To Break, THE AMORETTES have continued to demonstrate a considerable growth in both musicianship, and song writing, with Montgomery penning
some of her most diverse material to date. “͞This is definitely a departure from our heavier catalogue “she continues, However, I still feel that it encompasses the full Amorettes vibe.” And, as with the majority of Montgomery’s songs, it comes with a simple message for those who feel they may not fit in with the majority; “Haters are gonna hate! So, just get over it, and let your own little freaky flag fly.”
You can watch the video here:
The album “Born To Break” was produced by Luke Morley of UK Arena Rockers THUNDER and recorded and mixed by Nick Brine (The Darkness, Bruce Springsteen etc..) and was released in April through SPV/Steamhammer as CD digipak, 2LP gatefold coloured version, download and stream. Pre-Order Link: https://TheAmorettes.lnk.to/BornToBreak

The bold quartet The Cruel Intentions keeps on pushing the boundaries with their unique, modern glam rock sound! Today, the band releases their new single and music video “Jawbreaker”! The second single off their upcoming debut “No Sign Of Relief”, is a ridiculously catchy, 3-minute ride of pure rock’n’roll attitude and power, and definitely one of the album’s highlights!

The band’s vocalist, Lizzy DeVine, has commented: “Sometimes when your pen hits the paper while writing a song you start to realize you’re actually having an inner monologue with your 20-something year old self. ‘Jawbreaker’ is the outcome of that. Whether it’s a finger pointing or a mental high five to myself I’m not sure! But good times are always good times”, and continued about the video: “Sometimes a cool location, a bunch of long haired rock n rollers and a hungover guy being chased by a crazy dude with a hammer is all you need to make a rock video! So we did and added some red smoke for flair.”