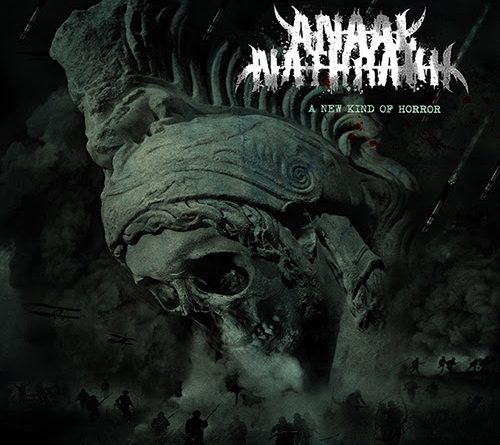 This Friday (September 28th), ANAAL NATHRAKH will release their 10th full-length, ‘A New Kind Of Horror‘, via Metal Blade Records. For a preview of the album, the new single ‘New Bethlehem/Mass Death Futures’ can be streamed below:

Pre-order the album in metalblade.com/anaalnathrakh – in the following formats:

When writing about ‘A New Kind Of Horror‘ in the record’s liner notes, ANAAL NATHRAKHvocalist Dave Hunt is succinct in his description: “This is not a happy album, it is bitter, vengeful, sarcastic, sardonic, violent, terrified and horrified, terrifying and horrifying in equal measure. Above all, it is human, and all that that entails. It’s as sincere as we could make it.” Those exposed to the ten tracks comprising the band’s tenth full-length will be unable to deny the truth to these words, for lyrically, musically and sonically it is a punishing listen mired in darkness and seething with raw emotion. With multi-instrumentalist Mick Kenney pushing their distinctive hybrid of symphonic black metal, death metal, industrial and grindcore ever forward, Hunt draws lyrical inspiration primarily from the horrors of the First World War, contemporary politics, and the letters of D.H. Lawrence, creating one of the most powerful, timely and unique releases of 2018. “There’s a lot that goes into our albums, of course, but it all comes about as a natural result of who we are, and for ‘A New Kind of Horror’ we felt early on that it was clearly its own thing. It doesn’t have to stand in comparison with anything, because to us it’s in a class of its own.”

A New Kind of Horror track-listing
1. The Road To…
2. Obscene as Cancer
3. The Reek of Fear
4. Forward!
5. New Bethlehem/Mass Death Futures
6. The Apocalypse Is About You!
7. Vi Coactus
8. Mother of Satan
9. The Horrid Strife
10. Are We Fit for Glory Yet? (The War to End Nothing)

Due to be released through Century Media Records on November 9th 2018 – The first single “When Nightmares Reign” delivers an eerie introduction to an album that adds a darker vibe to the raw, riff packed mayhem that DEATHRITE creates.

Listen to “When Nightmares Reign” here:

Frontman Tony comments: “When nightmares reign” isn’t only the title track of the record, it’s also the opening track, the introduction to a whole new chapter of the band, opening the gates to a “dreamland” full of obscurity, death and evil. Now follow us on a journey into the deepest shades, where NIGHTMARES REIGN!”

US thrash/heavy metal veterans Tourniquet have published a lyric video for the single ‘Sinister Scherzo’, which is taken off from the band’s forthcoming album, “Gazing at Medusa” which is scheduled to be released mid October via Pathogenic Records.
Drummer and songwriter Ted Kirkpatrick comments: “We’re thrilled with the response to the first two singles. This album took considerably longer to record than expected, but we feel the fans will find it to be worth the wait. It’s been great to work with Tim and Chris on this one.”
The album is mixed and mastered by Aaron Pace. T-shirts are available, and pre-orders are up for both CD and vinyl at tourniquet.net
Watch the lyric video below: