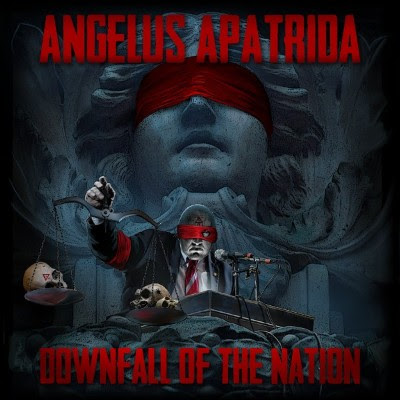 Spanish Thrash Metallers ANGELUS APATRIDA continue to pre-promote their new studio album “Cabaret de la Guillotine”, set for worldwide release via Century Media Records on May 4th, 2018. Following up 2015’s acclaimed “Hidden Evolution”, which entered the charts in Spain on # 2, this sixth studio album effort showcases the wide Heavy Metal range of ANGELUS APATRIDA, from neck-breaking Thrash, to truly melodic and yet powerful Metal, acting as the group’s most diverse effort to date.

ANGELUS APATRIDA are now unleashing the upcoming album’s second single entitled “Downfall Of The Nation” via a video-clip directed by Holy Cuervo (Nacho Montero and Paco Fernández), to be seen below:

The band checked in with the following comment for “Downfall Of The Nation“:
“It’s frightful to see how extremism becomes a normal thing nowadays. Dangerous people taking over of a country’s patriotic symbols and making them their own, intolerant premises that sound like “either with me or against me”; complete devolution, the triumph of nonsense and the darkest part of the human race.”

ANGELUS APATRIDA’s “Cabaret de la Guillotine”, which will be available in the CD (in O-Card packaging), LP (180gr., in gatefold packaging and with bonus CD) and the Digital Album formats, is now available for pre-order here: http:// https://AngelusApatrida.lnk.to/CabaretDeLaGuillotine
CM Distro: https://www.cmdistro.de/Artist/Angelus_Apatrida/1458?Page=1&PageSize=25&Sort=13
Or in Spain here: https://www.lacasadeldisco.es/artista-angelus-apatrida/

Mixed and mastered by the longtime sonic partner Daniel Cardoso (Anathema, Anneke van Giersbergen) and with artwork by Gyula Havancsák (Destruction, Annihilator) – who also designed the artwork for the new digital single to be seen above

VARATHRON reveal music video for new track ‘Into The Absurd’

Legendary Greek black metallers VARATHRON launch music video for the track “Into The Absurd”, taken from the band’s forthcoming studio album “Patriarchs Of Evil”, due out on April 27th via Agonia Records. Watch the video here:

Seventh Sign From Heaven: released clip of “The Devil Fears Your Name”

The band Seventh Sign From Heaven made available to the fans their new official video. Musical “The Devil Fears Your Name” is the second track of the EP “Judgement of Egypt” that was launched in 2017. You can see the video below:

The images of the video were taken in a live show of the band in their home town, Picos/PI. The direction and publication were in charge of Gelfran Santos that managed to catch with perfection all the energy that the musicians manage to transmit in his shows.