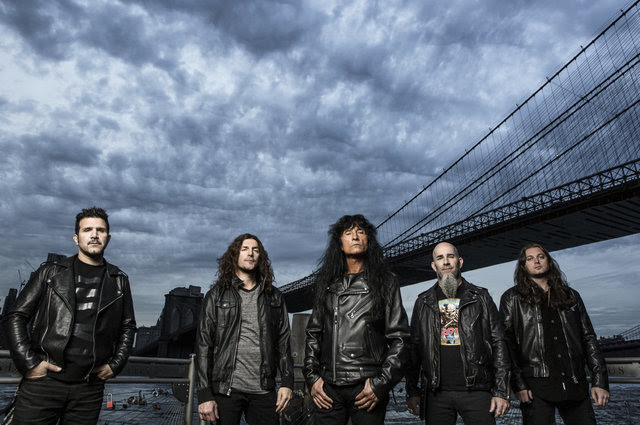 ANTHRAX will see its much anticipated, live-in-concert DVD, »Kings Among Scotland« arrive in stores and online today.

The two-hour »Kings Among Scotland« was filmed February 15, 2017 at the band’s sold-out concert at Barrowland Ballroom, the historic venue in Glasgow. The disc incorporates the band’s entire live show, and includes gems like ‘Madhouse, ‘I Am the Law‘, ‘Breathing Lightning‘ and ‘Indians.’ It also features interviews, behind-the-scenes footage and other B-roll shot on the band’s tour bus, backstage, in hotels and elsewhere, plus a “gear rundown” from each of the band members. Now you can watch another thrilling clip from the DVD, the live video of ‘Madhouse‘:

The DVD is now available in CD (audio only), DVD and digital formats (both video), get your copy here: http://nblast.de/AnthraxKingsScotland

“We are so excited that our DVD is finally being released,” said ANTHRAX’ Charlie Benante.  “Don’t be surprised if the package is vibrating and dripping with sweat when you open it…that’s how live and exciting it really is!”  Frank Bello concurred, “This was such an amazing experience for us.  The video is so alive and intense that even from the first edit, I felt like I was ‘right there’ at the show, in the audience.”

SHAMAN’S HARVEST RELEASE ‘THE DEVIL IN OUR WAKE’ VIDEO

Shaman’s Harvest are back with the brand new video for ‘The Devil In Our Wake’. The track comes from their latest album Red Hands Black Deeds, which was released last year via Mascot Records. Produced by Keith Armstrong, the album pre-meditatively took on a more organic approach, utilizing vintage gear.

Talking about the song, Singer Nathan Hunt offers, ““The Devil in Our Wake” tackles the topic of war. “I’d go to bed with CNN on to some bullshit at the White House, or the heartbreaking situation in Syria. I’d see what’s going on in the world and think, ‘Shit, how did we get so divisive?'”

Red Hands Black Deeds is a darker, visceral, and more layered sound than past repertoire. The album ranges from the ominous, haunting vibes of the title track prelude, “A Longer View,” “The Devil In Our Wake,” and “Scavengers” – which could fit just as easily on a horror film soundtrack as it does on this rock band’s album – to quieter, more vulnerable moments as heard on “Tusk and Bone” and “Long Way Home.” Lyrically, the band also ventured into new territory, taking on the current political, social, and economic struggles the USA is facing as a nation under the new administration. “Red Hands Black Deeds touches upon the darker nature inside all of us,” says Hunt. “The whole record has a contrast and push and pull tension – a juxtaposition of good and bad or questioning what is right and wrong. The record ended up having a concept, though we weren’t intending it to,” says Hunt.

Kazakhstan’s own thrash maniacs ZARRAZA have just released a lyric video for “Abyss Above Me,” the opening track to their long-awaited sophomore album Necroshiva. Inspired by the likes of Slayer, Napalm Death, Sepultura, and Decapitated, ZARRAZA‘s new track demonstrates the promise of this underrepresented corner of the worldwide metal scene.

Stream “Abyss Above Me” below: