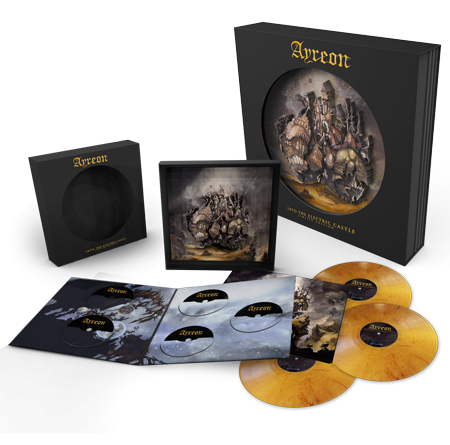 Ayreon – NEW VIDEO for ‘Across The Rainbow Bridge’

2018 marks the 20th Anniversary of the phenomenal ‘Into The Electric Castle’ by Ayreon. To celebrate this Arjen Lucassen has remixed the entire album, which will be released on various formats on 26 October 2018, via Music Theories Recordings/Mascot Label Group.

New Video For Re-mixed Version Of ‘Across The Rainbow Bridge’:

Talking about the new music video for Across The Rainbow Bridge Arjen comments: “In honor of the 20th anniversary re-release of ‘Into The Electric Castle’ we proudly present you this cool lyric video for the newly mixed version of ‘Across the Rainbow Bridge’! It’s created once again by the amazing Wayne Joyner, I think it really captures the right mood. Hope you enjoy it too, despite that weird Hippie-dude :-)”

After The Final Experiment and Actual Fantasy (Revisited), it’s time for part 3 in the Ayreon-on-vinyl saga. It wil be released on the following formats.

And last, but certainly not least: VINYL!

In wait of their release show in Bucharest on the 7th of September (https://www.facebook.com/events/2035682246470549/), Romanian Death Metal squad SADDAYAH present a new single taken off their upcoming debut album, Apopheny of Life, the title track now available for streaming below:

Pre-orders for Apopheny of Life are now open and available here:

Brazilian death/progressive metallers Quintessente have published a brand new video for the track “Delirium”, which was taken off from the band’s latest album, “Songs From Celestial Spheres”.

With an history that goes all the way back to 1994, Quintessente have only released their debut full-length over the course of 2017. Entitled “Songs From Celestial Spheres”, this long-awaited album brings together ten tracks comprising the most varied styles within the metal genre, offering heavy and atmospheric moments influenced by doom, gothic, death, heavy metal and progressive rock.

The tracks on “Songs From Celestial Spheres” are like the stars in the universe – each one with its different chemical structure, age, mass, luminosity and magnitude. The lyrical theme is based on existentialism and the reflection on the forces that rule the human nature.