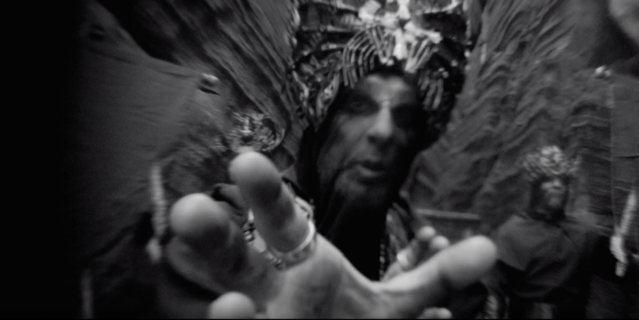 Before unleashing their eagerly awaited new album, »I Loved You At Your Darkest« this Friday, BEHEMOTH have released the brand new single ‘Bartzabel’.

Mastermind Nergal comments: “‘Bartzabel’ is a song that came in the midst of a BEHEMOTH rehearsal… We had no structure, no vision – but piece by piece, it came to be, and we were extremely excited by the result. To us, it’s the eye of the ‘ILYAYD’ storm: sonically calmer and slower than anything else on the record, but definitely one of the darkest!

Lyrically, we (myself and Krzysztof Azarewicz) were inspired by Aleister Crowley’s conjuration of the Spirit of Mars – which the video, by our trusted friends in Grupa 13, depicts beautifully…I may even go as far to say that it’s my favourite BEHEMOTH video of all time! I hope you all enjoy it, and we look forward to ‘ILYAYD”s launch this Friday!”

Produced by the band themselves, with drum co-production by Daniel Bergstrand(MESHUGGAH, IN FLAMES), mixing by Matt Hyde (SLAYER, CHILDREN OF BODOM) mastering by Tom Baker (NINE INCH NAILS, MARILYN MANSON), and a 17-piece Polish orchestra arranged by Jan Stoklosa, »I Loved You At Your Darkest« can be pre-ordered digitally now at: http://behemoth.lnk.to/ILYAYD – where the uncensored version of the video for ‘Bartzabel’ (directed by Grupa 13 / http://www.grupa13.com) can be viewed.

All Against releases lyric video for “Weapons Of Mass Distraction”

Portuguese thrash metallers All Against just release their lyric video for new track “Weapons Of Mass Distraction” from their latest EP “Feed The Machine.

The EP “Feed The Machine” was released yesterday and you can get it in the band’s bandcamp page – https://allagainst.bandcamp.com/album/feed-the-machine-ep

Let me introduce you to ‘Albhartach’, the new video by Belfast metal heads Stormzone. “Albhartach” is the third video taken from the 6th and latest Stormzone album ‘Lucifer’s Factory’, available now through Metal Nation Records.

Albhartach was a real Northern Irish vampire who terrorised people in North West Ireland until he was caught and buried alive under three massive rocks just outside Limavady. Farmers recently tried to remove the large boulders to enable them to use the field for crops, but their digging machinery went out of control and they decided it was best to leave Albhartach were he rested. Dracula is the most famous Vampire – writer , Bram Stoker, visited Albhartach’s burial area and conversed with locals before penning his famous novel! An interesting side note is the video was shot in Ireland by the Game Of Thrones team.