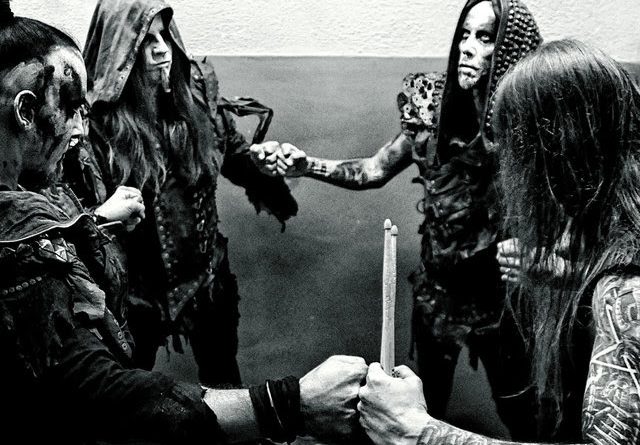 »Messe Noire« includes the band’s victorious shows in Warsaw, Poland on October 8, 2016 and Brutal Assault 2016 as well as »The Satanist« cinematic archive featuring all official videos associated with the band’s globally successful record of the same name. For a preview of »Messe Noire«, a live video of ‘O Father, O Satan, O Sun’ can be viewed now below:

Psychedelic trio DeWolff are delighted to reveal their new dark and horrifying video for Big Talk. The track is taken from their upcoming album THRUST, out May 4th via Mascot Records/Mascot Label Group.

Speaking about the track the band said “Every second you live there is a fork in the river where you can just follow the stream, do what other people expect you to do, think what other people tell you to think… or you can take control and live the best life you can live. For yourself, for other people, for the world. Don’t let anger control you and don’t let lies corrupt the kindness and innocence with which we’re all born. Don’t let the Big Talk kill ya, like the guy in the video. Or is it this killer new track that’s so lethal? We wanted to make a video with a very strong and simple concept. We came up with the idea of a man who swallows everything that’s being put in front of him. Director / DOP Christiaan Kanis took our idea to the next level and using a RED camera (Stranger Things was shot with this camera) he created an intense and beautiful yet horrifying cinematic experience. The actor you see is our friend Mitch Rivers, an amazing songwriter and musician himself. The result is definitely the most incredible music video we’ve ever released.”

Now staples in the Dutch Top 10 Album Charts, on the new album ‘THRUST’, they tackle contemporary social and political issues on ‘Deceit & Woo’ which was written on the day of Donald Trump’s inauguration and they explore the political climate closer to home on the opening track ‘Big Talk’. ‘California Burning’ attacks todays loud mouth society, they tackle gambling on ‘Tragedy, Not Today’, dark undertones on ‘Swain’ and  they approach the god of death on ‘Tombstone Child’.

Moloch presents the first single from “The Other Side” EP

MOLOCH returns with a stunning new chapter of his dark electronic music crusade. This time he will take you to “The Other Side” with a darkwave horror EP to be released on Walpurgis Night 2018 on Via Nocturna. Almost 30 minutes of dark soundscapes and synthesizer hell in vein of 80’s & 90’s sci-fi B-movies.

The single, track entitled “F.E.A.R.” is a crushing dark synth track that’s setting the tone for Moloch’s new mini-opus as well as giving a glimpse of what you can expect on his upcoming live shows in August. Just give it a spin here:

And that’s just the beginning. The complete tracklist is as follows:

The stunning artwork was designed by Mark Cooper (Rings of Saturn).

You can pre-order your copy at http://bit.ly/2GjVrLS