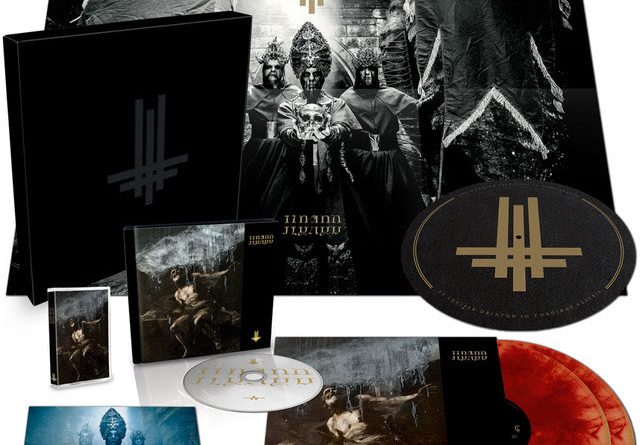 BEHEMOTH have released the official video for the new single, ‘Wolves Ov Siberia’ (directed by Kyle Kadow and Steven Cleavland). Watch it here:

Nergal comments: “‘Wolves Ov Siberia’ was the first song unveiled from »ILYAYD«, we began playing it on tour in May of this year – the raw energy and dynamism of the song lent itself perfectly to a live context! The studio version doesn’t lose those fundamentals and now with our added intricacies, you will be able to hear the call to Ancient times…the devil is in the detail, after all.  The video was purposefully very different from the well-recognised, Behemoth aesthetic – I wanted it to be chaotic, frenzied yet beautiful…I think this is mission accomplished and we’re really happy with the final product from Kyle Kadow and Steven Cleavland! Enjoy it!”

Produced by the band themselves, with drum co-production by Daniel Bergstrand(MESHUGGAH, IN FLAMES), mixing by Matt Hyde (SLAYER, CHILDREN OF BODOM) mastering by Tom Baker (NINE INCH NAILS, MARILYN MANSON), and a 17-piece Polish orchestra arranged by Jan Stoklosa, »I Loved You At Your Darkest« can be pre-ordered digitally now at: http://behemoth.lnk.to/ILYAYD – where the video for the first single, ‘God = Dog’ (directed by Grupa 13 / http://www.grupa13.com), can also be viewed.

To pre-order the album in various physical formats (see below) – and to pre-order an exclusive ‘God = Dog’ 7″ picture disc – please visit: http://nblast.de/BehemothILYAYD

WINDHAND give us another glimpse of what’s to come on their impending album Eternal Return with new single “Diablerie”. Embodying the album’s more reflective side, “Diablerie” fully captures the band’s artistic growth and the juxtaposition of genre-bending, heavy psychedelia that’s apparent throughout Eternal Return.

Eternal Return is a complete life-to-death journey. As unplanned things go, it’s an observation of as well as a reflection on life’s ups and downs, joys and sorrows, beginnings and ends. Between the band’s 2015, highly acclaimed Grief’s Infernal Flower, and 2018’s Eternal Return, WINDHAND welcomed new life, survived lineup changes, and mourned unexpected death. The songs and song ordering are the direct result of those experiences. Where “Halcyon” is assured in its opening, the closing track “Feather” is its funeral march.

Connecticut Metal Collective ENTIERRO have released the official music video for”Dybbuk,” a track from its forthcoming self-titled debut album. Come and get it below:

ENTIERRO‘s s/t album will be released digitally on September 10. Pre-order and stream three tracks at entierro.bandcamp.com/album/entierro-2

The ENTIERRO sound can best be described as focused on heavy drum and bass interplay, twin guitars harmonizing over visceral riffs with dynamic, multi-layered vocals. Founding member Christopher Taylor Beaudette (vocals/bass), who has played with JASTA and KINGDOM OF SORROW, provides a unique blend of captivating melodies mixed with soaring harmonies, while ex-FATES WARNING guitarist Victor Arduini strengthens the seamless blend of  NWOBHM with a bit of Thrash and a touch of Doom. The result is a muscular collection of captivating and surprisingly catchy songs.
ENTIERRO is a modern Classic Heavy Metal band that is focused on using their past influences to create an intense expression of powerful riffs and handcrafted slabs of undisputed sonic steel that any fan of the genre will appreciate and enjoy.
When asked what led to his joining up with the band in early 2017 Arduini stated:
“They were the one band from my area I was really digging. Their sound was true old school metal that just had some really cool heavy riffs and songwriting. They have elements of doom, bit of thrash and yet it comes across a class metal for the new ages. They took me out of my comfort zone as I had to learn a few new tricks which I’ve been embracing. I was a fan the first time I heard them. Chris is a great front man and after going to see them play a few shows I learned one of their guitarists was leaving and I was asked if I’d be interested in joining them. The timing was perfect. After finishing the Arduini/Balich album I pretty much needed a break from all that writing/producing I did and this allows me to just be a part of a band again without it all falling on my shoulders. With the great writing skills of the others I can focus on putting my style over what they come up with and occasionally add a riff or two when needed. It helped keep me actively playing and I’ve just been having a blast playing these songs with such awesome musicians.”
ENTIERRO has played extensively throughout the Northeast, surprising fans of all types of heavy genres with their energetic and precise live shows, and have released two EPs since 2014. ENTIERRO is ow set to release their first self-titled debut album, which was recorded at Dexter’s Lab in Milford, CT by engineer Nick Bellmore. The band will be performing a series of shows throughout New England in support of their new release. Dates can be found at www.entierro.bandcamp.com