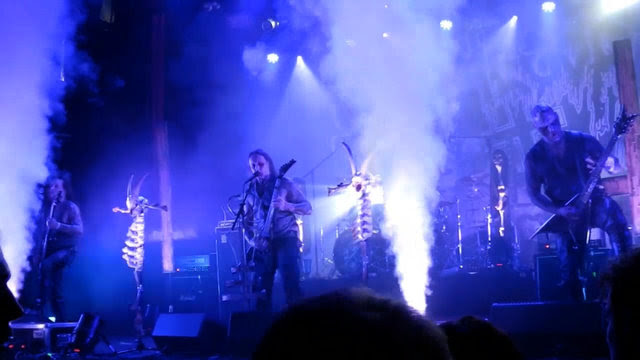 Shortly before invading the 70.000 Tons Of Metal Cruise, where they will perform two crushing live sets, diabolical death/black metal commando BELPHEGOR present a live clip of ‘Baphomet‘.
The song is the opening track of the band’s latest offering “Totenritual” and was recorded during the live ritual at Saving Christmass Festival in Nörrköping, Sweden last December, by the band’s friend and Norwegian shaman, Espen Dyngen.

Watch the clip below:

Sometime MINISTRY accomplice Burton C. Bell (FEAR FACTORY) guests as a nightmarish clown on the band’s just-released video for the track ‘Wargasm,’ which can be seen here:

Burton provided the track’s spoken word parts on the upcoming MINISTRY album “AmeriKKKant”, due out March 9 on Nuclear Blast Records, that you can order here:
http://nblast.de/MinistryAmeriKKKant

The ‘Wargasm‘ video incorporates non-stop military combat visuals that illustrate the song’s perspective, described best with the lyric, “Death, power and sex…These are the things that we do best…Which country wants it next…Not many left to molest…”

Talking about the song he says. “I’m extremely proud to present you the first full live video track of the upcoming Ayreon Universe DVD/BD. I picked ‘Everybody Dies’, which is not only a personal favourite, it also features many of the amazing singers and a lot of mayhem and commotion on stage! This is a total bitch of a track to play, but I must say the band totally nailed it! Hope you like it.”

‘Ayreon Universe – The Best of Ayreon Live’ will be available on 3LP + MP3, 3LP + MP3 (Limited Colored Vinyl), 2CD, 5 disc Earbook, plus 2DVD and Blu-ray with 90 minutes of exclusive behind the scenes footage and interviews with the whole cast.