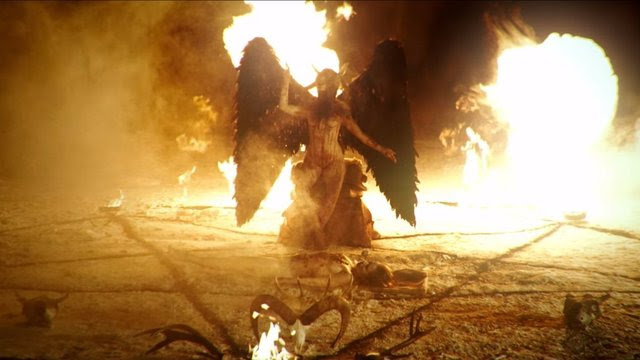 Diabolical Death/Black Metal troop BELPHEGOR recently premiered a censored version of their official music video for ‘Baphomet‘, taken from their freshly unleashed masterpiece, »Totenritual«. Today, along with the fearless folks at Decibel Magazine, the band has made the “Not Safe For Work” uncensored video available for the first time in all its sinister glory. Check out the clip below, shot and edited by Polish company Grupa13

The track that presented “Obscurity Rising, the upcoming album to the world finally gets a videoclip. Directed by Guilherme Henriques (Belphegor, Wormed, Hideous Divinity, Noctem, Haemorrhage, Unfathomable Ruination), the video for “Burn the Flags” is the perfect blend between the sonic frenzy and the sense of visual vertigo, a constant throughout the clip.

“Our intention is to provide a feeling of permanent caos and unrest on all levels”, refers guitarist Rui Alexandre. “One of the best parts of the artistic field is not having to have a functional purpose, if the artists desire to do so. We had no problem into creating a sheer massacre unto the spectator’s senses. Maximum intensity”, he finishes.

Despite being young, director Guilherme Henriques has plenty of experience in shooting metal videos. “It’s always an honor to be a part of a new era of a band. Terror Empire is no different, and I’m very proud of what I accomplished along with a group of musicians I consider my friends for a few years, now. It was a weekend with relentless hardwork, which is now reflected on this punishing videoclip”, he adds.

“Obscurity Rising” comes out on September the 22nd via Mosher Records, and can be purchased at www.mosherrecords.com. The release show will occur one day after, at hometown Coimbra (Portugal).”

French black metal devotees AOSOTH premiere the first single from their fifith studio album “V: The Inside Scriptures”, due out on November 17th via Agonia Records. Listen to “Her Feet Upon The Earth, Blooming The Fruits Of Blood”