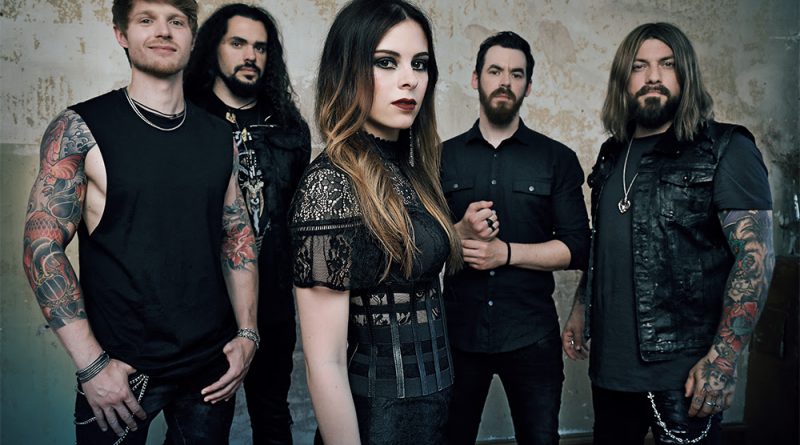 BEYOND THE BLACK – Reveal Album Details, First Single & Lyric Video Of “Heart Of The Hurricane”

BEYOND THE BLACK are ready to catapult, with full force, into the “Heart Of The Hurricane”. Their new album and title track prove to be promising masterpieces, courtesy of charismatic singer Jennifer Haben.
The band on Heart Of The Hurricane:
“Can you feel the thunder? After a turbulent phase in the short history of BtB we can say that we came out stronger than ever! Witness to that is our first single ‘heart of the hurricane’, which takes you through a sonic thunderstorm to be reckoned with! We absolutely cannot wait to unleash this storm upon old and new fans alike, as we are sure that this new chapter will take us on a beautiful journey through dark and light!”
Watch the lyric video below:
Check out the stunning album artwork, including track listing and all available formats of Heart Of The Hurricane below: The exclusive Pre-order is available HERE!

Laederbraun is an Italian hard rock project that has its roots in the picturesque province of Lecco. The group was born from an idea of ​​Simone Goretti (guitarist composer) flanked by the inseparable drummer Antonio Romano, who brings together around him some artists to give body to the whole. In fact, the entry of the little more than twenty years Isabella Conca, the bass of Gionata Montanelli and the cello of Michele Nasatti become part of the band.


Presentation of “Barracuda”
Barracuda is an outrageous video, blunt and full of metaphors. The band tried to summarize “today’s rottenness” by paraphrasing it in a sort of metaphysical cannibalism.

“Today the world is full of false friends, people who want you out of the chorus, want to isolate you, to get rid of the bones, without limits, the daily news of people cheated, assaulted,” raped ” even psychologically by good people which are actually wolves dressed in lamb “, according to the band’s words.

After taking the world of rock music by storm with last year’s surprise hit »Amber Galactic«,which was nominated for a Swedish Grammy and accompanied by a European tour that left fans speechless, Swedish classic/progressive rock supergroup THE NIGHT FLIGHT ORCHESTRA are set to release their impatiently awaited next album, »Sometimes The World Ain’t Enough« on June 29 via Nuclear Blast. Now the band releases the official music video for the brand new song, ‘Lovers In The Rain’.

The real life/animation mash up video was created by renowned artist Elia Cristofoli of Solingo who also made the infamous video for last year’s hit single ‘Gemini’.

Commented the band: “‘Lovers in the Rain’ is the soundtrack of the way it felt when you held the hand of your first true love for the first time. Happiness so intense, your heart beating so fast that it almost feels like a panic attack. And in the back of your head, you’re already mourning the fact that one day it will all be over. But during those first trembling moments, you know that nothing will ever be the same again. From now on, you will always compare every life experience to these first magic moments.

‘Lovers in the Rain’ is an hommage to the anthems of our youth, the songs that made us believe that in every life; no matter how insignificant you might feel sometimes, you will someday have that experience with someone. Hopefully with THE NIGHT FLIGHT ORCHESTRA playing in the background. And believe us, we’ve all been there.

This song, like the whole new album, is about those moments when you transcend reality and might for one fleeting moment catch a glimpse of the otherworldly. It’s for each and every one of you, with love from THE NIGHT FLIGHT ORCHESTRA, remembering everyone we’ve ever loved and lost.”