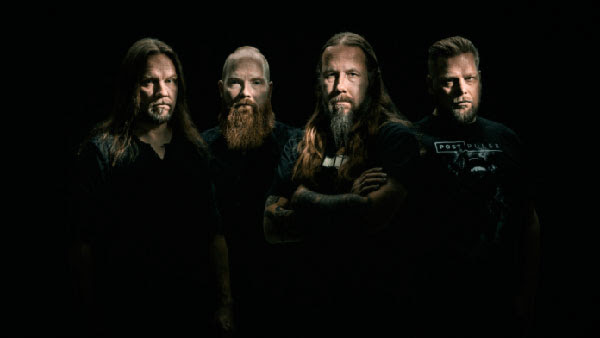 Produced by Black Royal, mixed by Jussi Kulomaa and mastered by Jaakko Viitalähde, “Lightbringer” features the artwork of Samu Peltola and is set for release on March 9thvia Suicide Records. Physical pre-orders are now available here.

Norwegian metallers SUSPERIA release music video for the track “My Darkest Moment”. The video was filmed by Costin Chioreanu (Twilight 13 Media) and Gina Sandulescu. The song comes from the band’s upcoming album “The Lyricist”, set to be released on March 16th via Agonia Records. Watch the video here:

SUSPERIA is comprised of former Dimmu Borgir, Satyricon and Old Man’s Child members. Their new album “The Lyricist” will arrive nearly nine years to the day its predecessor (“Attitude”, 2009) came out. “The Lyricist” is available for pre-ordering HERE.

On March 16th, cult metallers PARADISE LOST will release a remastered version of their legendary seventh studio album, »Host«, and a first-ever pressing of the songs on vinyl.
As a first taste, the Brits have now unveiled a lyric video to their single ‘So Much Is Lost (Remastered)’, which once was the first track to be released off their 1999’s »Host«. This album saw PARADISE LOST moving further away from their previous death metal roots to a melancholic electropop sound.

Jaime Gomez Arellano, who remastered the album, states: “»Host« is a fantastic album with a stellar production. When I had the opportunity to remaster it, I focused on warming it up through analogue tape and giving it more of that analogue ‘vibe’ since a lot of records from that period were a bit thin sounding in comparison to today‘s standards. The remaster resulted in more depth and bass frequencies and generally a warmer and fuller sound. I hope the fans enjoy it!”

PARADISE LOST singer Nick Holmes adds:
“It was interesting to revisit this stage of the band’s history. It’s certainly not metal thrashing mad, but I’ve always regarded some of our strongest material was written around this period, and I still regard ‘So Much Is Lost’ as a really strong song.”

The album will be available as digipack and in three different vinyl colours (black, clear and mint) for the first time ever. Pre-order starts today, you can get your copy here:
http://nblast.de/ParadiseLostHostNB

Pre-order digitally and receive ‘So Much Is Lost’ instantly at:
http://smarturl.it/SoMuchIsLost
https://smarturl.it/HostRemastered

The band’s latest doom metal monster »Medusa« is now in stores and has been voted ‘best release of 2017’ by several magazines such as World Of Metal, Decibel or Rock Hard Italy: http://nblast.de/ParadiseLostMedusaNB