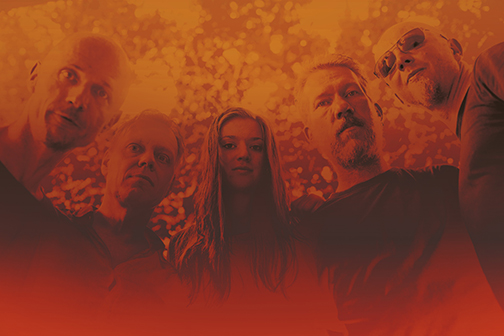 Fresh on the heels of the January 2018 release of Amoretum Vol. 1, BLACK SPACE RIDERS are set to return with the compelling follow-up, Amoretum Vol. 2.
Pre-order Amoretum Vol. 2:
www.blackspaceriders.com/shop
blackspaceriders.bandcamp.com/album/amoretum-vol-2
The songs on Amoretum Vol. 1 & Vol. 2 were all written over a three-month period, and subsequently recorded and produced in a single rush of creativity. The band decided to release the more than two hours of music that came from their mid-2017 writing session in two different parts. As BLACK SPACE RIDERS’ 6th album, Amoretum Vol. 2 is a continuation – a second book – but it also exists as a completely autonomous work.
Is Vol. 2 the rebellious older sister of Vol. 1, or the young, untamed brother? Maybe …
Amoretum Vol. 2 explores the tension between darkness (fear, hate, rejection) and light (empathy, love, acceptance). The albums were titled Amoretum – a blend of “Amor” (or Cupid, as translated from German) and “Arboretum” – as a symbolic reference to the sanctuary of nature and love. While this concept applies to both albums, Vol. 2 is a storm raging through the Garden of Love!
A wild, 14-track ride awaits. Hard, fast heavy rockers morph into new wave indie sounds and even postpunk loses its “post.” Psychedelic triphop meets dub reggae roots and then ends in a loud rush of psychedelic riffs.
Sonically, Vol. 2 delivers a massive, atmospheric, hypnotic, sometimes raw and sometimes tender sound. This, with all the joy of experimentation, is held together by a band that never wants to stop. With all the movement and all the detours, Vol. 2 still manages to sound like one coherent entity. The common thread is in the sound, groove, melody and atmosphere that permeates everything and leads you through this epic journey.
BLACK SPACE RIDERS will release Amoretum Vol. 2 July 27 on double vinyl (w/ CD), digisleeve CD and digital formats.

FANTASY OPUS – video for “Realm Of The Mighty Gods“ released

FANTASY OPUS has released a video for the song “Realm Of The Mighty Gods”. That song is on the album “The Last Dream”, which was released on 8th June 2018 via PURE STEEL PUBLISHING. The album is available as CD and Download.

ST. ELMOS FIRE has released a video for the song “Lord Of Thunder”. That song is on the album “Evil Never Sleeps”, which was released March 30th, 2018 via PURE STEEL RECORDS. The Album is available as CD and Download.