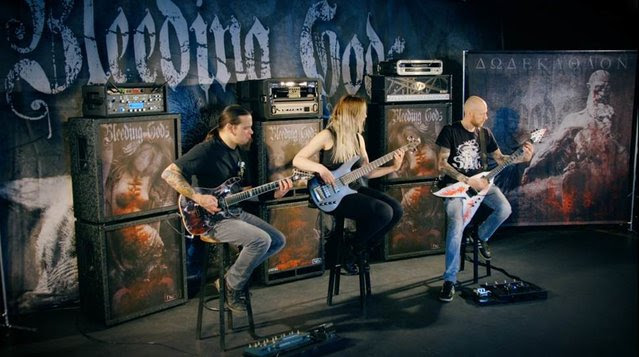 In January 2018, Dutch epic death/black metallers BLEEDING GODS released their new concept album »Dodekathlon« via Nuclear Blast. After several shows in the Netherlands and Belgium in February this year, the band is currently preparing for the upcoming Japan tour in May.

Album concept
The album title »Dodekathlon« is referring to the Greek myth of the twelve labours of Hercules, the greatest of the ancient Greek heroes.´Driven mad by Hera (queen of the gods), Hercules slew his son, daughter and wife Megara. After recovering his sanity, Hercules deeply regretted his actions. He was purified by king Thespius, then traveled to Delphi to inquire how he could atone for his actions. Pythia, the oracle of Delphi, advised him to go to Tiryns and to serve his cousin king Eurystheus for twelve years, performing whatever labors Eurystheus might set him. In return, he would be rewarded with immortality. During these twelve years, Hercules is sent to perform twelve difficult labors, which has resulted in twelve album tracks: Every labor is a track, so the complete album tells the whole ancient story.

Like a mid-20th century funhouse gone mad, MINISTRY‘s just-released video for the track‘Victims of a Clown’ is a relentless hallucinogenic ride through images of creepy clowns roaming circuses where there are no exits, men parading in ghoulish gas masks, psychological messaging, physical reality bending, and nightmarish suburbia. And then there’s DJ Swamp‘s couture. You can check it all out here:

‘Victims of a Clown’ was produced and directed by Chris Roth and Steve Roth of The Other House Productions, the same team that created MINISTRY‘s surreal and provocative ‘Twilight Zone’ video as well as ‘I’m Invisible’ for Jourgensen‘s side project, SURGICAL METH MACHINE.

“For the ‘Victims of a Clown’ video, we strived for a drastic stylistic departure from ‘Twilight Zone,” said Chris Roth. “This video is a much more raw, down-and-dirty, crunchy graphic art film.”

Filmed in Los Angeles late last year, the entire video was shot exclusively with handheld cameras and the band was lit with extreme rapid flash lighting that limited the final palette of the video to only three colors – black, white, and red. “The end result,” Steve Roth added, “is very powerful. Loaded with raw energy and power.”

MINISTRY‘s new album »AmeriKKKant« is out now and you can get your copy here:
http://nblast.de/MinistryAmeriKKKant

Recorded with producer Jarrett Pritchard (Exhumed, 1349, Goatwhore) at New Constellation Studios in Orlando, FL, Twisted Prayers features GRUESOME doing what they do best across eight songs and 40+ minutes of unholy hymns with lurid melodies and vulgar atmospheres. The band has once again teamed up with the legendary Ed Repka (Death, Atheist, Massacre) for the album’s blasphemous cover art in addition to legendary DEATH guitarist James Murphy (Death, Obituary, Testament) for a pair of special guest guitar solos. Bow your heads and worship at the altar of GRUESOME!

Watch a lyric video for GRUESOME’s new song “A Waste of Life” below and listen on all digital streaming services HERE.

Vocalist / guitarist Matt Harvey commented on the new song: “‘A Waste of Life’ was a great opportunity to channel Chuck and vent some frustration in a constructive way – through making some good ol’ fashioned Death Metal. It’s great to move forward in the Death catalog and get some new ground to cover. As much fun as we had working with the raw and nasty stuff on Savage Land and Dimensions of Horror, it’s great to challenge ourselves musically and thematically just like Chuck, James, Terry and Bill did on Spiritual Healing. Hopefully we do those guys justice and everyone has as much fun listening to the track as we did creating it”

Additionally, GRUESOME will release a cover of MANTAS’ “Legion of Doom” as part of Decibel Magazine’s Flexi Series in the forthcoming June issue as a special pictured flexi disc. An accompanying Flexi Disc featuring companion artwork and a cover of POSSESSED’s “The Exorcist” will be available with the deluxe LP edition of the album at Relapse.com.

GRUESOME’s second studio album Twisted Prayers is due out June 1st on CD/LP/DLX LP/CS/Digital via Relapse Records. Physical packages are available via Relapse.com HERE and Digital Downloads / Streaming Services AT THIS LOCATION.