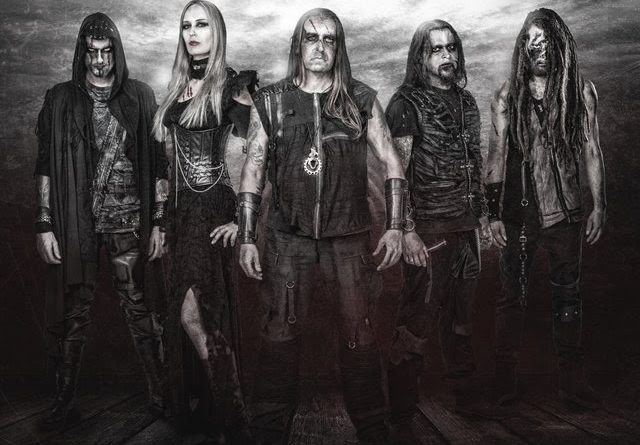 Recently, Nuclear Blast proudly announced the signing of Dutch epic death/black metallers BLEEDING GODS and the release of their upcoming album “Dodekathlon”. This new record will be a concept album and is scheduled to be released on January 12th, 2018! Today, the band presents their first single with it’s corresponding music video to the song ‘From Feast To Beast’. Watch it here:

Main man and guitarist Ramon Ploeg comments the song and the video, directed by Sebastiaan Spijker: “We are really proud to launch our first single ‘From Feast To Beast’ from the new album »Dodekathlon« upon you! The track is about catching the Erymanthian Boar and bring it back alive to King Eurystheus. This was Hercules’ 4th labour of the series of 12 episodes concerning his penance for slaying his son, daughter and wife Megara (more info see below). Sebastiaan did an awesome job directing the video, which only shows some band shots. It is a real joy to work with him and he has a good and fast communication, which we like. We hope you will enjoy the video as much as we do!”

Additionally, BLEEDING GODS today unveil the album’s track listing (see below) and therefore also more insights on the album concept! The twelve songs represent the twelve labours of Hercules, the greatest of the ancient Greek heroes, who had to serve his cousin king Eurystheus for twelve years and to perform these twelve labours to concern a penance for his terrible actions…. But more info on the album concept will follow soon! The album was recorded at Pitch Note Productions and Hal 5 Studio; mixed and mastered at Soundlodge Studio. The cover artwork (see above) was created by Dimitris Tzortzis from Immensa Artis.

The band was founded in 2012 when guitarist Ramon Ploeg started to write an album after he had left the Dutch death metal band HOUWITSER. In 2013, BLEEDING GODS recorded their 4-track promo entitled »Blood Symphony«. The lyrical theme was about ancient gods and history like the Mayans, ancient Egypt and Greek gods. In 2014, BLEEDING GODS signed for their debut album »Shepherd Of Souls« with Punishment 18 Records and got worldwide awesome reviews, even today!

One year later, the turning point was there: New line up, new songs, new concept, new album! BLEEDING GODS renewed their line up and are now stronger than ever! After their debut »Shepherd Of Souls«, the band knows exactly which band they want to be and consequently Ramon Ploeg (Guitars), Mark Huisman (Vocals), Rutger Van Noordenburg (Guitars), Gea Mulder (Bass & Backing Vocals) and Daan Klemann (Drums) created a brand-new concept. Let’s get ready for »Dodekathlon«!

VANDROYA: “THE PATH TO THE ENDLESS FALL” MUSIC VIDEO RELEASED

The female fronted progressive power metal band VANDROYA just released a music video for “The Path To The Endless Fall”, the second single from their new album “Beyond The Human Mind”. The album is available now through Inner Wound Recordings in Europe and North America and through Bickee Music in Japan.  You can watch the vide below:

With a more evident progressive influence but without giving up the weight and virtuosity of power metal, the new album brings a more mature band, a more balanced sound and reflects the musicians technical and artistic evolution since the debut album “One”.  The album concept revolves around the journey we all go through in search of fullness and inner peace. The album artwork is created by Felipe Machado Franco [Blind Guardian, Rhapsody of Fire, Iced Earth].  Led by vocalist Daísa Munhoz, Vandroya are ready to take the next step and make a mark in the metal scene with “Beyond The Human Mind”.

Chicago Doom/Sludge eclectics I KLATUS have released the official video for “Moment of Devastation,” a track from new album Nagual Sun. Go forth and devastate below.
Nagual Sun is available on digital and analog (cassette) formats. Stream and/or purchase at: https://iklatus.bandcamp.com/album/nagual-sun
The highly anticipated follow-up to 2012’s Kether is the band’s third full-length album (and fifth release overall). Official videos for  “Sorcerer’s Gaze” and “Beneath the Waves” can be viewed here and here, respectively. The “Final Communion” official video can be viewed at this location.
The overall sound of Nagual Sun maintains the gritty roots for which I KLATUS is known, while at the same time launches the group into new and more fully fleshed-out dimensions of weirdness. Tom Denney is the primary soothsayer behind I KLATUS. Denney, whose background is steeped in the visual arts, has provided artwork and monsters for a laundry list of signed metal acts in the community (KYLESA, BLACK COBRA, SAMOTHRACE, CANNIBAL CORPSE, CEPHALIC CARNAGE and RWAKE just to name a few). His guitar squalls hard against the shores of this stoner metal effort, but also manages to rise above the storm in melodic hymns. Denney trades growling vocals with bass player, John E. Bomher, Jr. (BURY THE MACHINES, YAKUZA), who keeps things grinding nicely, while also providing some sweeter tones when they let songs open up and sweep across more ethereal planes.
Bomher doubles as the band’s producer with his extensive experience in the studio; his work on the album sets this release head and shoulders above their previous efforts in terms of production quality. The drums are championed by Chris Wozniak (LAIR OF THE MINOTAUR, EARTHEN GRAVE, SERPENT CROWN) who metes out doom in guttural timing. Wozniak just pounds and pounds, hitting that sonic-pocket, which gives the stoner/doom genre its feeling of lift and expansiveness. Some noises and textures by former member, Robert Bauwens, are also tucked into the nooks and crannies of these tracks. Last by not least, special thanks goes to author Ryan Sean O’Reilly for his contributions to the press release.