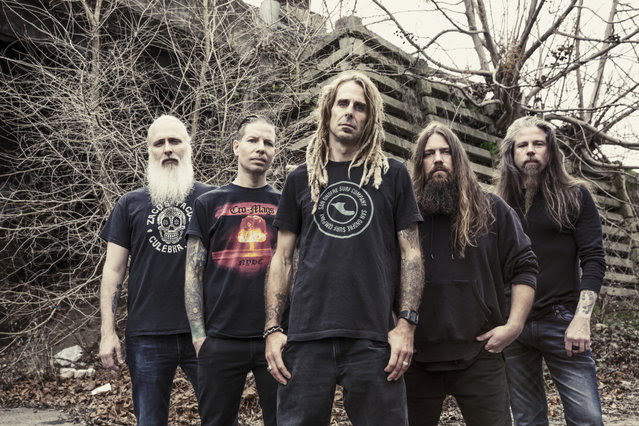 RIAA-certified, Billboard chart-topping, Richmond, VA band LAMB OF GOD may be one of the biggest bands in modern metal, but they will never forget where they came from. Mark Morton (guitar), John Campbell (bass), and Chris Adler (drums) formed the first incarnation of the band, BURN THE PRIEST, in the winter of 1994 after meeting four years earlier as students at Virginia Commonwealth University. Less than a year later, in the summer of 1995, they met vocalist Randy Blythe before adding Chris Adler’s brother, Willie Adler (guitar), prior to transitioning to LAMB OF GOD – and the rest is global metal history.

Guitarist Mark Morton says, “To truly understand the essence of the band BURN THE PRIEST, one must first consider the landscape in which it began: the mid-90s. Grunge and alternative music ruled the airwaves. Social media and the internet had yet to assume their role as our collective sources for entertainment and cultural exchange. It was a time when DIY ‘zines turned us onto new bands and regional scenes, and ‘copy and paste’ still implied a print shop and a glue stick.”

BURN THE PRIEST’s self-titled debut album, released via Philadelphia-based Legion Records, documented what was, in essence, a primal punk band performing metal. Ultimately, as they grew in local popularity, the five-piece chose to stray away from their name to avoid being associated with satanic metal, choosing the name LAMB OF GOD.

Morton continues, “As our sound and songs developed, so did our goals… we began playing basement parties and warehouse shows and in doing so, we realized that the energy we were creating was transferable. The shows we played in those squats and warehouses [in Philadelphia] and the people we met there are forever embedded in our collective consciousness and the DNA of our band.”

As they enter their 20th year since releasing their first self-titled album as BURN THE PRIEST, the band will release a full-length covers album that reflects on the greatness of classic punk, hardcore, crossover and noise – rock subgenres that contributed to what LAMB OF GOD – and indeed, the world – now view as modern heavy metal.

As BURN THE PRIEST, the band presents »Legion: XX« – featuring tracks originally performed by CRO-MAGS, AGNOSTIC FRONT, QUICKSAND, MINISTRY, BAD BRAINS, MELVINS, S.O.D., THE ACCUSED, BIG BLACK and Richmond punk band SLIANG LAOS. The tracks are performed with the unmistakable precision that has kept the band vital for two decades, but ultimately harks back to the raw, punk-driven sound first explored by four unsuspecting college students and a line cook-turned-vocalist in their formative years. Produced with Josh Wilbur at the helm, »Legion: XX« exhibits BURN THE PRIEST in their true element.

“Our inauspicious beginnings somehow grew into something none of us had ever even imagined possible, let alone aspired to, however, this is the story of BURN THE PRIEST,” adds Morton. “The songs we chose to cover on this album reflect that story. They are touchstones from that point in time. The inspiration we gleaned from these bands and these songs carries through our work and our creative pursuits, even to this day. Many thanks to these bands for lighting our fire and endless gratitude to our fans around the world for keeping it lit.”

»Legion: XX« will be officially released on May 18, 2018 via Nuclear Blast [Epic Records in the US] and will be available for purchase via all physical and digital retailers. Physical pre-orders and merch bundles are available now via: http://nblast.de/BTPLegionXX

Today, fans can watch the brand new BURN THE PRIEST music video for ‘Inherit The Earth’, originally performed by THE ACCUSED, and cut from »Legion: XX« (video directed by Travis Shinn). Watch here:

“I’ve been an ACCUSED fan since I was 14 when they were on the »Thrasher Skate Rock Volume 3« compilation with C.O.C. and all these amazing crossover bands,” says frontman Randy Blythe. “Their singer Blaine Cook was a huge influence on me, vocally.”

Drummer Chris Adler recalls, “‘Inherit The Earth’ hit me in the face soon after I managed to get my grubby mitts on the album sometime around ‘88. I got the ACCUSED record at a “Yellow Banana” record store on Route 1 south of DC while in route back from my “counselor” to my home in Woodbridge, Virginia. I got home and grabbed my board and I rocked it on my Discman. At about 2:12 into the tune the clouds parted above me and on a loudspeaker, God bellowed down to me, ‘RECEIVE YOUR PURPOSE.’ That was the moment I knew that if I tried hard enough, I could convey myself and how I felt – with music. It will never be “ours,” and we know that about all the tunes we’ve covered, but hopefully one of them hit you in the face as I had been, and God will part the clouds for you, too.”

Bonus song (only on LP!):
In The Meantime (originally performed by HELMET)

Blythe adds, “I have a radio show on Gimmie Radio, and [the station] is all metal shows except for mine. I do the punk rock show because I want to show the direct correlation between my band, and the punk scene going back to THE MC5 and THE STOOGES. There is a direct link — look at old pictures of METALLICA, SLAYER and ANTHRAX, and they’re wearing MISFITS, D.R.I., and C.O.C. t-shirts. They fused the technicality of metal with the intensity of punk rock. Before them, metal was like in slow motion. Speed metal bands were listening to DISCHARGE. I beat that drum all the time when I talk to kids.”

»Legion: XX« is a sonic tribute to metal’s dark, dirty secret – the punk inspiration of all future heavy music to come.

ST. ELMOS FIRE – video for “Across The Nations“ released

ST. ELMOS FIRE has released a video for the song “Across The Nations”. That song is on the new album “Evil Never Sleeps”, which will be released March 30th, 2018 via PURE STEEL RECORDS, and you can listen to it below:

Greek heavymetallers AFTER DUSK have just released a live video to “Take The Bitterness Away”. The original version of the song comes from the new AFTER DUSK album “The Character Of Physical Law”. The live version was recorded and shot in a mountain cave (the acoustic parts) and Sierra Recordings Studio (the electric parts). You can see the vdeo below: