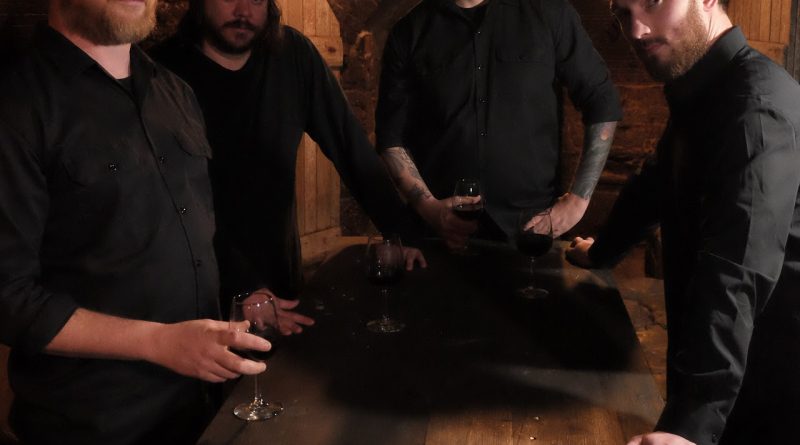 American death/black metallers CAST THE STONE and David Hall (Uneasy Sleeper, Portal, The Melvins) unleash a video for their cover of Indfestdead’s (Dan Swanö) “Jesusatan”. The track appears on the band’s forthcoming six-track EP “Empyrean Atrophy”, due for release on August 31st via Agonia Records. Listen & watch at:

CAST THE STONE is Mark Kloeppel (Misery Index, Scour with Phil Anselmo), Derek Engemann (ex-Cattle Decapitation, Scour), Jesse Schobel (Legend, ex-Scour) and vocalist Andrew Huskey. First formations of the band began in 2002, long before its protagonists departed for their better known metal-scene mainstays. While such ties leave a clear mark, CAST THE STONE emerge not as some metal supergroup, but as a project of the original and purest intent of its membership.

Each of CAST THE STONE members is involved in writing music, and each has varying tastes. But they all seem to have one acquired taste in common: an appetite for American and Swedish death metal. On “Empyrean Atrophy”, one can distinctly hear sounds similar to Dismember, Grave, At The Gates, and other proponents of the genre. There are also artisan elements one could liken to more dark and progressive Swedish acts such as Opeth, Edge Of Sanity and Dissection. Perhaps this reason alone, Dan Swanö was a clear choice for production (having produced or had been a member of some of the aforementioned bands).

Hybridizing the dark ferocity of Swedish death metal through a lens of American brutality, CAST THE STONE hits a creative stride with “Empyrean Atrophy”. Guitarist Mark Kloeppel commented, “The band’s sound is a testament to an enduring spirit that’s driven us to return to our most organic influences, merge them together, incorporate disparate elements, and forge our own sound. Each person has a distinct sound unto themselves, so it’s really cool how smooth and cohesive this stuff comes across. You can immediately hear how different this is from the other things we’ve been involved in, yet it’s still very true to our individual styles. Our bassist Derek progressively weaves my guitars and Jesse’s uber-creative drumming style together in a way that only he can. This is all crowned off by Andy Huskey’s crazy death metal vocals which are… well, just listen”.

Milwaukee Metallers H1Z1 have released the official video for “S.S. Departed (Silent Convictions)” a track from the album Unbounded.

H1Z1 is a Heavy Metal quintet that delivers crushing grooves with an attitude that can’t be mistaken for anybody else, combining elements from Nu Metal, Hardcore, Groove, Death, and Black Metal. Formed over the summer of 2010 with founding members Patrick Gunderson (Guitars), Juan Rojo (Drums), and Marq Pointer (Vocals), the band broke ground playing in the DIY scenes of Milwaukee and Madison. H1Z1 subsequently recruited Justin Mack as a second guitar player and dedicated clean vocalist.
The band released its first full-length album Unbounded on August 11, 2017.  After the release, bassist Stephen Jensen stepped down from the band, but fortunately a longtime friend and fan stepped up to fill the role quickly: Bryan Bykowski.  H1Z1 marches on, bringing forth a new wave of Heavy Metal Elements.
h1z1.bandcamp.com/
open.spotify.com/artist/1CTgPSHoIdyIqUvBMG5TTW
www.facebook.com/H1Z1metal/
H1Z1 YouTube
twitter.com/H1Z1_Metal

French post-black band DECLINE OF THE I release new track in anticipation of their thrid studio album “Escape”, which is due for release on July 27th via Agonia Records. Listen to “Disruption” below: