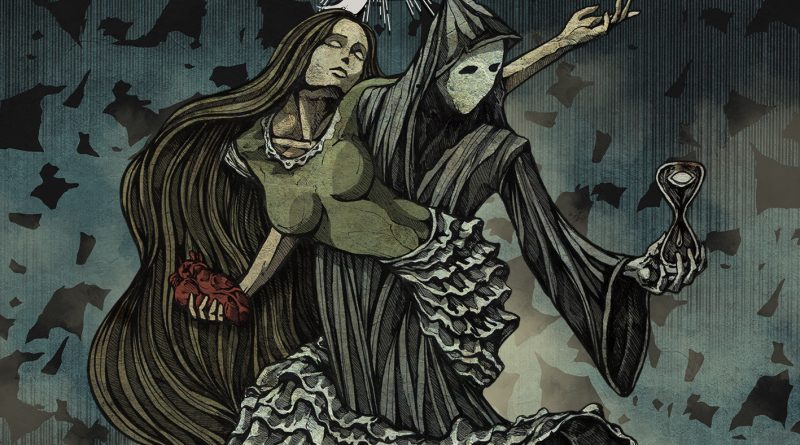 After surprising their fans with ‘Insomnia‘, the proggy and mad first single from their upcoming album, the Swiss progressive folk rockers CELLAR DARLING have dropped a brand new song and have finally announced long-awaited details about their new release. Their second studio album will be a concept album entitled »The Spell« and it is set to release on March 22nd. Pre-orders are available now and you can get the album as 2 CD-digibook (featuring 13 songs + an audiobook of Anna Murphy telling the story behind the concept), black vinyl or digitally via this link: http://nblast.de/CDTheSpell

Below you can see and listen to the “The Spell”

Along with these big news, CELLAR DARLING unveiled the title track of the album.

“As some of you have discovered already, over the past 13 days we have revealed the tracklist of our new album, along with amazing artwork created by Costin Chioreanu, who is also behind all of the beautiful animated videos for the new songs.
The 13 tracks of  »The Spell« invite you to witness the journey of a girl who falls in love with Death. In the song released today, a spell has been cast on our protagonist — for now, her love shall go unfulfilled…”
– CELLAR DARLING

ALL ELSE FAILS Posts Band Playthrough ‘A Dream of Names’

Canadian metallers ALL ELSE FAILS unleashed their new album ‘The False Sanctuary’ this past December. Keeping with their tradition of crushingly heavy and progressive metal, the album features 2 new songs along with 5 B-sides that were never released digitally from their critically-acclaimed 2016 full length ‘The Forever Lie’.

To follow the band’s music video for their track ‘A Dream of Names’, ALL ELSE FAILS has put together a band playthrough for the release’s lead single. The playthrough showcases the band’s technical guitar parts against melodic vocals and thought provoking lyrics that address the current state of the world.

Watch ‘A Dream of Names’ band playthrough below:

“In a lot of ways this album is at a state of the union address. It’s been 2 years since the release of The Forever Lie, and already the themes of financial corruption, abuse of religious power, and political scandal seem tame. I wrote this one half with a sarcastic smirk, half with a crippling sense that we are well past the point of return.”

‘The False Sanctuary’ is available on Bandcamp (pay what you want), along with stream and download on Spotify, iTunes, and all major online retailers.

In Summer 2017, TESTAMENT’s Steve Di Giorgio teamed up with Tim “Ripper” Owens, Chris Caffery and Mark Zonder, for a new musical project, SPIRITS OF FIRE! This outstanding supergroup will release their self-titled debut album, on February 22, 2019, via Frontiers Music Srl. Now SPIRITS OF FIRE have unleashed a new single, “Stand and Fight”, check it out here:

North American fans can get LIMITED EDITION, exclusive red color vinyl & collector’s box (feat. CD + T-Shirt – Size L ONLY) HERE: https://frontiersrecords.pmstores.co/ These are limited to 100 each and this is the only retailer in North America carrying these items.

European fan can get the same items HERE: https://bit.ly/2RXvA0Q

The SPIRITS OF FIRE music can best be described as “classic Priest meets Savatage”.

Guitarist Chris Caffery on his influences for the record and working with Roy Z: “My influences for writing on this record were the bands that we were and are still in! I wanted to write songs that [Judas] Priest, Savatage, Testament, and Fates Warning fans would like. But, I wanted them to have a personality of their own as well. To give it a vibe that was SPIRITS OF FIRE! I grew up listening to Judas Priest and spent 30 plus years working with Jon Oliva and Paul O’Neill with Savatage and TSO. Many years playing Criss’ music. These influences for me came naturally! Especially because I’m a fan of all of our bands!

This was the first time that I ever worked with Roy and it was so much fun. I have been a huge fan of his work for a long time. He’s written music, played on, and produced some of my favorite metal albums ever. He had a difficult job bringing this all together and I can’t think of anyone that would have been a better producer and co-worker for this album!”

“I always just sing to the song, whatever I feel it should be. It’s like a character thing! I like layers! This music is really perfect for me and in my natural wheel house. I like to sing all over the place and change it up and this all happens on this album. This is just the start of an amazing band, I mean sky is the limit and I actually can’t wait to record the next album, because this one is so great and perfect,” says vocalist Tim “Ripper” Owens.

Drummer Mark Zonder adds about his playing and writing process, “I am the kind of player that plays what I think fits best with the music. With SPIRITS OF FIRE, the music was more aggressive and hard hitting which I really liked. Again, I tried to be very mindful of the song and the vocals, but tried to add parts that were interesting and creative for the listener.”

Get more information at https://www.facebook.com/SpiritsOfFireBand