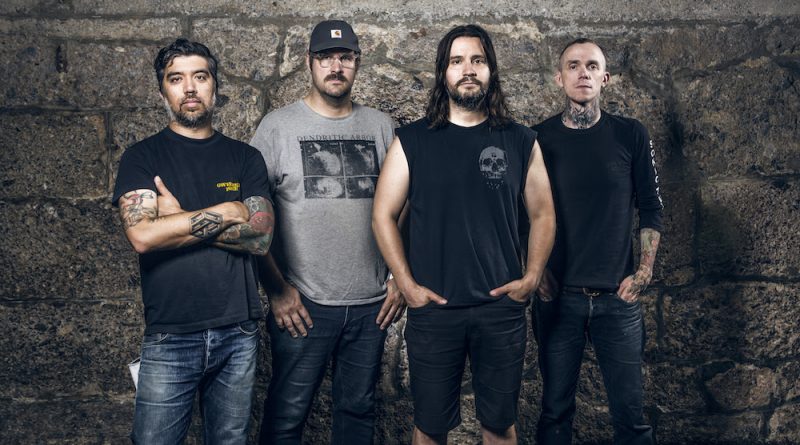 Boston-based heavy music pioneers Converge have released a new four song E.P. titled Beautiful Ruin.  Recording during The Dusk In Us sessions, this E.P. completes the release of all their recorded material from that time period.  Each song on Beautiful Ruin is a staccato burst of emotion from Converge at their most raw; viciously precise yet alluringly out of control.  Watch it below:
Beautiful Ruin was produced and mixed by Kurt Ballou at his renowned Godcity Studios in Salem, MA and follows Converge’s ninth full-length album, The Dusk In Us, which was released in November of 2017.  The album received Best Of accolades from Rolling Stone, Stereogum, Revolver, Metal Hammer, The Independent, Loudwire, and more.  Beautiful Ruin is out today from Epitaph / Deathwish Inc. and is available for purchase now from ConvergeCult.com.
Converge will embark on a west coast tour with Neurosis on July 6th; the two-week tour will bring the bands from the Pacific Northwest through California, heading down and ending Texas and will feature support from Amenra and Birds In Row on select dates — a full list of shows can be found below.
Beautiful Ruin, Track Listing:
1. Permanent Blue
2. Churches & Jails
3. Melancholia
4. Beautiful Ruin

BEYOND CREATION have released a new video for the track “Theatrical Delirium” taken from the band’s latest album ‘Earthborn Evolution’. The clip can be viewed below. The video for “Theatrical Delirium” will be the last offering from this album, as the band have already finished their complete new upcoming full length which will be released via Season of Mist later this year.

“Theatrical Delirium” is taken from their acclaimed latest full-length ‘Earthborn Evolution’ (2014), which was preceded by the Canadian’s stunning debut full-length ‘The Aura’ (2011, re-issued by this label in 2013). Both are still available though the Season of Mist shop.

After song teasers and full song videos, ATROCITY have finally released an official video for a brand new single! Enjoy “Shadowtaker” in all its bloody glory below:

The video was produced by Rainer ZIPP Fränzen / Und Action! in cooperation with Mastersound Entertainment.

ATROCITY’s upcoming dark and brutal death metal masterpiece “OKKULT II” will be released next Friday, on July 6th and will be available in various formats, such as Jewel Case CD, ltd. media-book with a different artwork and bonus CD, ltd. vinyl LP as well as a ltd. metal box-set including the media-book, a t-shirt, a sticker, postcards as well as a signed autograph card. You can order the album here » https://massacre.lnk.to/okkult_II

A very special record release show is set to take place at the Sunstorm Open Air in Nordheim, Germany, on July 6, 2018!