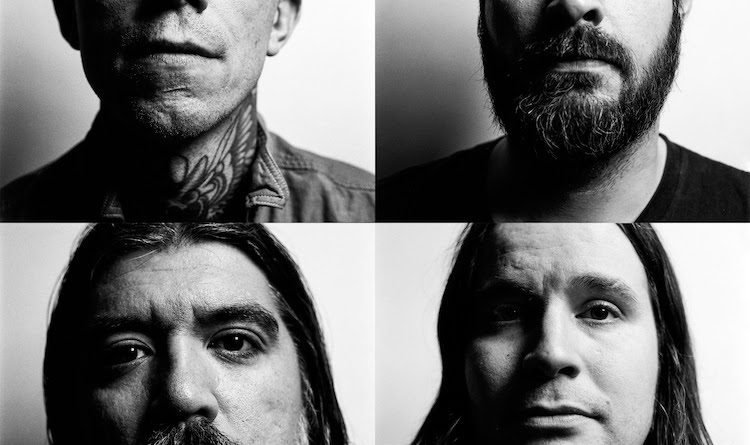 “Reptilian” is the new single from Boston-based heavy-music innovators Converge. The track appears on Converge’s forthcoming album The Dusk In Us, set for release via Epitaph and Deathwish on November 3rd, 2017.
From its haunting intro to its frenetic apex, “Reptilian” perfectly embodies the avant-garde sensibilities and cathartic energy of The Dusk In Us. The ninth full-length from Converge, The Dusk In Us is the band’s first album in five years.
Listen to “Reptilian” Now:
Featuring vocalist Jacob Bannon, guitarist Kurt Ballou, bassist Nate Newton, and drummer Ben Koller, The Dusk In Us arrives as the follow-up to Converge’s acclaimed 2012 album All We Love We Leave Behind. Along with landing on Pitchfork’s Best New Music list, All We Love We Leave Behind was called “as skull-cleaving as it is beautiful” by Consequence Of Sound.
Produced by Converge and mixed by Ballou at his renowned Godcity Studios, The Dusk In Us shows the band’s artistic evolution while still capturing their classic sound. As pioneers within the aggressive music arena, Converge formed in Massachusetts in 1990, made their debut with 1994’s Halo in a Haystack, and broke through with their landmark album Jane Doe (a 2001 release praised as “iconic” by the A.V. Club).
Pre-orders for The Dusk In Us are available now at http://kr-m.co/converge
THE DUSK IN US TRACKLIST:
1. A Single Tear
2. Eye of the Quarrel
3. Under Duress
4. Arkhipov Calm
5. I Can Tell You About Pain
6. The Dusk in Us
7. Wildlife
8. Murk & Marrow
9. Trigger
10. Broken by Light
11. Cannibals
12. Thousands of Miles Between Us
13. Reptilian

Austria’s blackened thrash metallers Tulsadoom have published a brand new video for the track “Fist from the Grave”, which is taken off the band’s upcoming split with fellow countrymen Hellrazors.

‘Helltulsarazordoom’ is the first split in the history of Cursed Records and is scheduled to be released on October 17th in analogue formats only (MC & LP).

SORCERER have now released a lyric video for the brand new single ‘Ship Of Doom’ and you can watch it below:

Comments the band: “‘Ship of Doom’ captures the essence of Sorcerer. Slow, doomy and full of surprises for the listener. The music for this one was written by our very talented guitarplayer Peter Hallgren.”