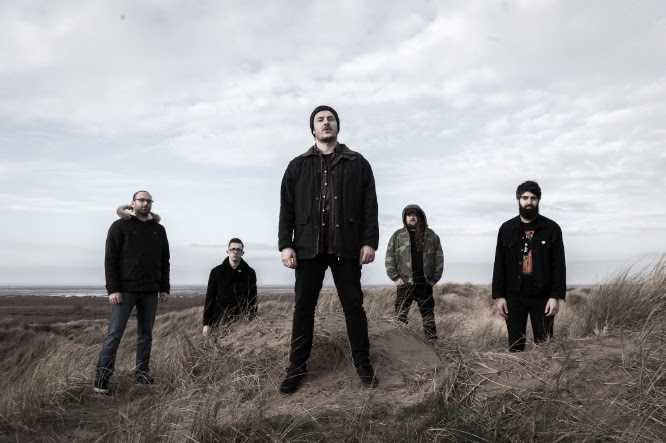 Abrasive five-piece, CORRUPT MORAL ALTAR, have today unveiled the stark video for their track, Engineering Consent. The track is taken from their recently released album,Eunoia,  which is out now.  The video was filmed and edited by Ryan Fallon and features the exquisitely named DJ Bastardcunt.

Having released the album on a “pay what you want” basis via Bandcamp towards the end of 2017, the overwhelming response has led to the band opting to release Eunoia physically too. The record has been pressed on 180g black vinyl, with matte finish inner and outer sleeves, plus a gloss A4 print of a recent shirt design. It is available to purchase  HERE – where you can also download the album digitally for whatever price you like, including sweet eff-all.

After their epic live session trilogy “Rain Shelter Sessions”, CRYPTEX are back to continue this one-of-a-kind project on a new level. Once again the German proggies prove their talent for hitting our ears with unexpected mixtures of melancholy, progressive rock and a hint of folk in a mystic atmosphere – in “Rain Shelter Sessions, Part 4-6” as a digital EP. With a huge amount of passion and dedication they accepted the challenge and  interpreted one of the biggest bands of all time in their own way. “Eleanor Rigby” by The Beatles is the first new “Rain Shelter Sessions” masterpiece to be released as a video, which has a special meaning to the band. Just as they did with SAVATAGE’s “Gutter Ballet”  in 2017, they took a song and did not pointlessly cover it, but make it their own in a highly creative, unique way.

“At first, the crazy idea of ​​approaching the Beatles music seemed to us to be very presumptuous. However,  the intention behind it is ultimately completely different than just letting loose another Beatles cover on the public or even wanting to decorate yourself primarily with forbidden fruits.
Rather this is to be seen as a tribute, a personal affair of the heart, to the greatest and most important pop culture band and their compositional work, which, thank God, is so timeless that their music apparently will never exceed the zenith.

The Beatles influenced me already in my early childhood days and will always mean a lot to me! Accordingly, this project is also very emotional for me. We are quite proud of our version of this classic and find it, related to today’s events, unfortunately even more relevant and contemporary than ever.
So remember: LOVE IS THE ANSWER, DAMMIT! AND YOU KNOW THAT AS WELL AS WE DO!”

The first of the 3 videos accompanying the EP once again, as the whole concept, stands in the tradition of the big US college radio stations and gets across not only the contemplative element of passion for pure playing. It is also a wonderful proof of authenticity and shows that good music can have an impact beyond the big stages and studio productions. But better watch and listen for yourself:

The new EP “Rain Shelter Sessions Pt 4-6” will arrive on all digital platforms both streaming and download tonight and during the weekend. However, early birds can hit Bandcamp right away to either listen for free or support the band directly by buying the EP. Here you go: https://cryptex1.bandcamp.com/album/rain-shelter-sessions-pt-4-6. Two more videos coming soon. Spotifans, in the meantime, can pre-lash with “Rain Shelter Sessions Pt 1-3”  on Spotify here:
https://open.spotify.com/album/4rpTlPZ4RIL5htGxEQsjer?si=wKka8tmITx-x-f_w_8WnIQ.

Echoes of another world resound from the depths of the legendary rabbit hole. Music diffused with moments of silence and escapist dream sequences, freed from time and earthly presence – now immortalized on AURI‘s self-titled debut album, which is out TODAY via Nuclear Blast!

Following the release of their album, the band also releases the brand-new lyric video for ‘Desert Flower’. Watch it below:

AURI begun its life with three people, united through their shared need to hear a kind of music which can‘t be described by words alone. A magical kind of sound to be heard whilst falling down Alice’s rabbit hole. The Finnish singer Johanna Kurkela lent her unique voice, while Troy Donockley and Tuomas Holopainen (both NIGHTWISH) cast their spells with various other instruments. Using selected guest musicians and friends, their self-titled debut album finally took its ultimate form under the direction of sound engineer Tim Oliver, all within the pastoral splendor of ‘Real World’ studios in Southern England.