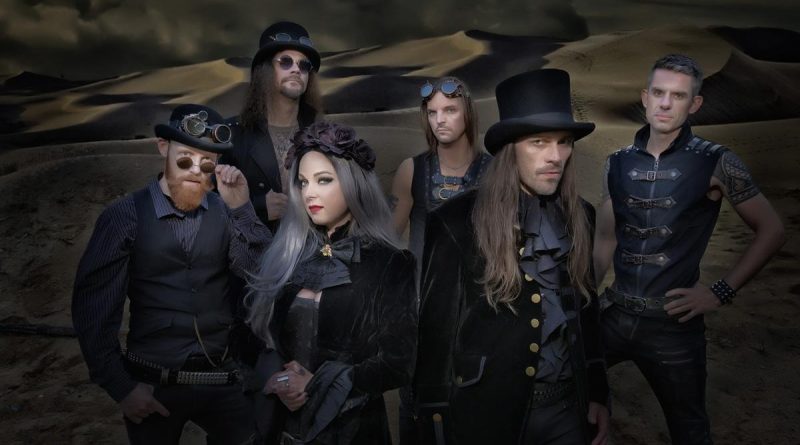 The Finnish cinematic metal band Dark Sarah just released a music video for “Golden Moth” from their new album “The Golden Moth”. Below you can see it:

“The Golden Moth” was released on September 21st via Inner Wound Recordings.
“The Golden Moth” is the last part of the first Dark Sarah trilogy (The Chronicles). The trilogy tells about Dark Sarah’s travel through three worlds: The Middle World (“Behind The Black Veil” album), The Underworld (“The Puzzle” album) and The Upper World (“The Golden Moth” album).
On “The Golden Moth” album Dark Sarah has to face the final test and find her way to the gods in the Upper World. After she had solved the puzzle in The Underworld and found the three keys, the Iron birds came there for her and took her to the Upper World, a deserted waste land where the gods rule. But also a trespasser, The Dragon, came with her. In the heat of the desert they meet again and there is something The Dragon wants from her..
JP Leppäluoto (Charon) has joined the official lineup as The Dragon for the upcoming album. Also in the roles of The Gods you will hear featuring artists as Zuberoa Aznarez (Diabulus In Musica) and Marco Hietala (Nightwish) and Netta Skog (ex. Ensiferum) as Fortune teller.
DARK SARAH official line up:
Heidi Parviainen (as Dark Sarah) – vocals
JP Leppäluoto (as Dragon) – vocals
Erkka Korhonen – guitar
Sami Salonen – guitar
Rude Rothstén – bass
Thomas Tunkkari – drums

Side Effects: the new video “Don’t turn away”

Croatia’s rock power trio SIDE EFFECTS have just unleashed the brand new video “Don’t Turn Away” to celebrate the release of the new album “Descending Rabbit Holes”.
The album was released on September 28th via ROCKSHOTS RECORDS. “Don’t Turn Away” is the first video featuring the new bass player Petar Stojko, who joined the band earlier this year. SIDE EFFECTS brings progressive arrangements enhanced with a fusion of powerfully delivered intricate drum parts, fierce bass, virtuoso guitars and poetic lyrics.

The video was directed, shot and edited by Denyken, and it’s available below:

The new album “Descending Rabbit Holes” is now available on all the major physical and digital stores and at the label’s official shop.
ROCKSHOTS Shop ➤ http://bit.ly/SideEffects_CD
SPOTIFY  ➤ https://spoti.fi/2ms50zd
ITUNES ➤ https://apple.co/2LskDRY

Peruvian death metal monsters ROTTEN EVISCERATION reveals the first single “Ascending From The Putrid Grave”. The album “Ancient Grave Ascension” will be out on November 1st 2018. Watch the lyric video:

“It is the first time we will have a support like this for one of our songs. We are very excited to show the video to all the death metal maniacs. This video fits perfectly with the song “Ascending From The Putrid Grave” because the lyrics are closely related to the art of the cover. It show in its images all the musical brutality that we want to transmit to the audience”