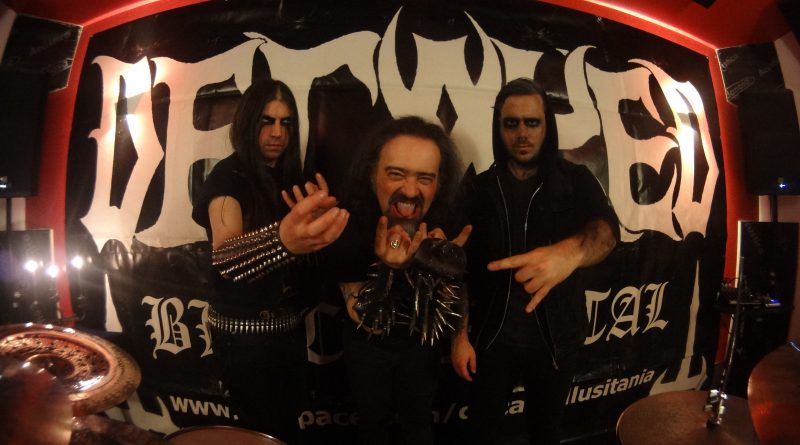 Portuguese classical black metallers Decayed are back with a new opus – “Of Fire And Evil”.  Alvorecer De Almas Perdidas” is the second track taken from the album, Decayed’s twelfth full length in a career with more than 25 years. You can watch the video below:

NEORHYTHM offer what can only be described as Metal from Space on debut album Zetetic. Creative in concept and aggressive in approach, Zetetic is an interstellar journey that is impossible to forget. The album, which was produced and mixed by Vladimir Lehtinen (SECOND TO SUN), will be released on June 18. A promo video for new single “Golden Mean” is available below:
Pre-order Zetetic and listen to new singles “Golden Mean” and “Dark Matter” at:
neorhythm.bandcamp.com/album/zetetic

The origin story of NEORHYTHM, as told by the cosmic metal duo, is an intriguing one, to say the least:

“On a distant planet in the constellation E61,3 (which we call Neuw ourselves),
two renegade traitors of interstellar spaces from the red subrace of Nameless decided to penetrate the Virgo Supercluster. It happened on the earthly calendar in the year 1703. For more than 300 years our spaceship plowed through the galaxy until it came across the Milky Way to the bright yellow dwarf G2V, which you call Sol.

A strong stream of stellar wind carried us to the orbit of planet Earth, where as a result of a breakdown of one of the plasma engines we were forced to land in the geographic terrestrial region of Lapland, in a barren taiga. Since we needed help, we sent encrypted sound signals to all regions of the universe, as well as to the top leaders of the human Terra planet, to provide us with technological support. Our signals, converted into musical scales, were intercepted by the developed radio frequencies of earthlings, and you can now listen to them in the form that you call songs.”

For many rock listeners, Gaborone, Botswana is not the first location one thinks of when it comes to the hometown of many heavy metal bands. But since 2006, the three-piece Skinflint has been making their hometown located in Southern Africa proud. On June 1st, the group will be issuing their fifth full-length release overall via INTO Records (distributed by Cargo Records), which will be self-titled, and as heard by such standout cuts as “Eyes in a Leopard’s Spots” and “Birds and Milk, Bloody Milk,” Skinflint continues to build on the promise of their previous albums.

“We feel that this album is the culmination of our style of African metal,” explains the band. “The album was named Skinflint as we feel that the music here best showcases our artistic vision and what Skinflint stands for. We chose ‘Birds and Milk, Bloody Milk’ as the first single of the album, due to its distinctive style and Kwasa Kwasa influences. Which has never been explored in the realms rock/metal music before. For the video, we included Kwasa Kwasa dancers and shot it in two days at a village called Mokatse, in Botswana.” The music video for “Birds And Milk Bloody Milk” can be viewed below:

“Making this album was a challenging experience even though, strangely, we wrote the majority of the songs in about a week. We allowed the compositions to happen organically and as a result we uncovered a new mystical, dimension to our style of music. The album is not overproduced and retains the raw energy and passion of a band live in the studio. The video for ‘Birds and Milk, Bloody Milk’ was quite fun to shoot, as we have never featured dancers in any of our videos.”

Comprised of guitarist/vocalist Giuseppe Sbrana, bassist Kebonye Nkoloso, and drummer Alessandra Sbrana, Skinflint puts a unique spin on heavy music, by incorporating elements from African culture with metal music, and in the process, has attracted the attention of such international media outlets as CNN, Dutch TV, Swedish National Television, BBC and many more. Their earlier releases,‘Iklwa,’‘Gauna,’‘Dipoko Nyemba,’ and ‘Chief of the Ghosts’ pay homage to African spirituality and mythology, while still playing in the vein of traditional heavy metal, and have been credited as a pioneering example of African metal.

And along the way, Skinflint has collected countless accolades, such as being named one of the top 5 “Best Metal Bands from Botswana” by Metal Hammer, their song “Iqungo” being selected as one of the ‘Top 20 African Metal Songs of 2017’ by the African Metal Facebook page, the Metal Temple website calling the group “one of Botswana’s most well-known metal bands for good reason, and I’d highly recommend checking them out to those who haven’t heard their music yet,” and the Metal4Africa site declaring “Skinflint keeps its heritage close to its heart. Themes within the lyrics, and more as of late within the music itself, are deeply rooted in African folklore. Listening to Skinflint‘s five albums, one can follow the progression.”

So far, Skinflint has played shows in Southern Africa, Kenya and enjoyed successful tours as far as Sweden and throughout Europe with Tarja. And on the strength of their forthcoming self-titled offering, are looking to perform their music to metalheads throughout the world.