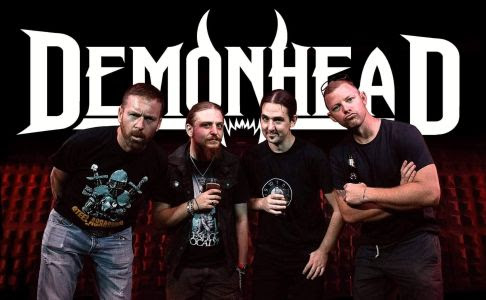 Melbourne Australia, Demonhead have just unleashed a video for their new single “No More”. This is the first new music from the band since 2015’s NWOTHM tinged album ‘Bring on the Doom’ and is the first taste of what’s to come on 2018’s yet to be titled Full-Length.

The video was directed by Owen Keswick-Gallagher (Orpheus Omega) from OKG Productions and sees the band inducted into a cult and brainwashed into “Drinking the Cool-Aid” as the cult leader counts the money made.

The song was recorded by Chris Themelco at Monolith Studios and sees the band deliver a heavier sound, yet keep the same sense of groove and rock sensibility that was present on their previous releases.

Right To The Void – Official Video For “Lines”

French progressive death metal combo Right to the Void are proud to announce the release of“Lines” official video on VEVO / YouTube and you can see it below.

“Lines” is taken from Right to the Void’s EP “Lūnātĭo”,  out on November the 17th 2017 viaWormholedeath.

Hellish God‘s “The Evil Emanations” showcases 10 tracks of blasting Death Metal! Featuring current and former members of Antropofagus, Imposer and Mindful Of Pripyat the band moved its first steps in 2015 with the intent to play savage and satanic Death Metal influenced by the classic late ’90s sound.  “The Evil Emanations” is the band first full album and is conceptually focused on Qlipoth, metaphorical shells which represent evil spiritual forces in the Jewish mysticism.